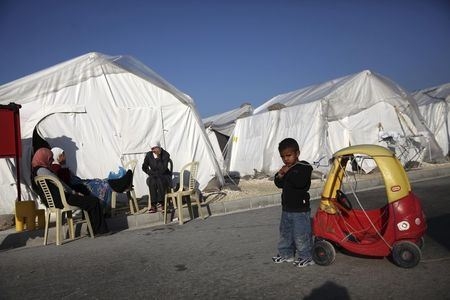 Syria has approved a United Nations plan to deliver humanitarian aid to millions of people in the war-torn country this year, but warned the only way to the end the crisis was to help Damascus fight terrorism. The strategic response plan appeals for some $2.9 billion in a bid to help 12.2 million Syrians, more than half the population, who are in need as the country’s civil war approaches its fifth year. Syrian diplomat Haydar Ali Ahmad told a U.N. Security Council meeting on the humanitarian situation in Syria that the government wanted to ensure that “assistance reaches all those citizens in all parts of Syria without discrimination.” “The Syrian government on 17 December 2014 … adopted the Syrian Response Plan for 2015, complementing national efforts which have been made since the beginning of the crisis to lessen the suffering of our people,” Ahmad said. More than 200,000 people have been killed in Syria’s conflict, which began in March 2011 with popular protests against President Bashar al-Assad and spiralled into civil war after a crackdown by security forces. Militant group Islamic State has also seized swathes of territory in Iraq and Syria. The United States and some allies have for months mounted regular air strikes against Islamic State. But Washington has rejected the idea of allying itself with the Syrian government even though they now have a common enemy. “What is required today is cooperation and coordination with the Syrian government in combating terrorism, particularly to end the humanitarian crisis in Syria,” Ahmad said. U.N. deputy aid chief Kyung-wha Kang said the relentless violence in Syria by both government troops, armed opposition groups and extremist militants had led to “one of the worst displacement of people the world has seen in decades.”