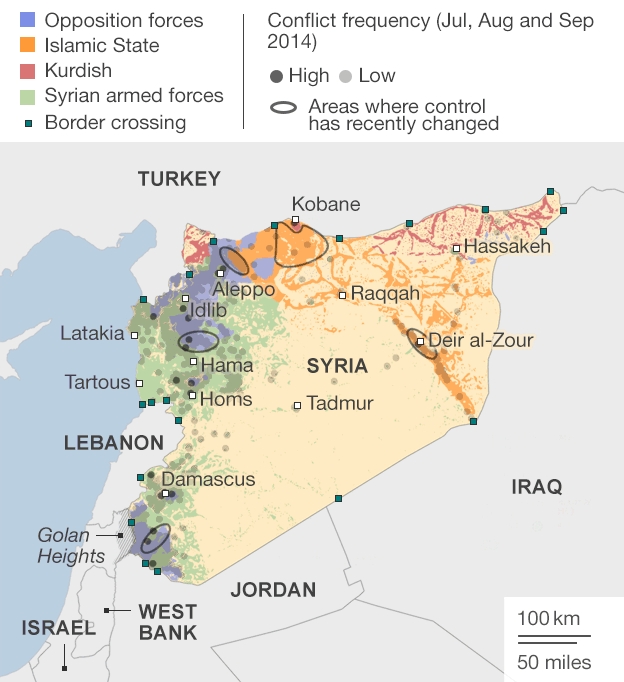 The UN mediator in the Syrian conflict, Staffan de Mistura, has told the BBC he believes there is a fresh opportunity to resolve the country’s crisis. He said truce measures may be favourable to moderate rebels and government forces as they face a common threat from Islamic State militants. The UN has called for “freeze zones” to halt fighting and improve aid. More than 200,000 people have died in Syria’s increasingly fragmented civil war, now in its fourth year. Rebel groups, including jihadists from Islamic State (IS) and the al-Qaeda-aligned Nusra Front, have been fighting among themselves, as well as against forces loyal to President Bashar al-Assad. Syria’s conflict has broadened this year, with a US-led coalition now carrying out air strikes against IS fighters and positions. The job of Syria’s UN envoy has long been called “mission impossible.” The task was to be available, with a plan, if and when all sides were ready to listen. On a visit to Aleppo this week, some observers told us some warring parties might now be willing to consider a way out of this crisis. But Syrian troops are now encircling the last rebel-held areas of eastern Aleppo to cut off supply lines. It is a siege tactic used time and again in this war. There is infighting among rebel forces. Mr de Mistura boldly chose this “iconic” city for the first “freeze” to send a strong political message to fighters and a message of hope to Syrians. President Assad’s initial response is unusually positive. But all sides will only agree to a “freeze” if they’re prepared to accept a status quo, however temporary. And for the government, that means a plan that consolidates their hold. Separately on Tuesday, the UN refugee agency said it was short of the $58.5m needed to prepare millions of Syrian refugees for the onset of winter. “I wish that we could keep everybody warm,” the UNHCR’s Amin Awad told reporters, adding that 11 young children froze to death last winter. Temperatures can drop as low as minus 16C (3.2F) in some parts of Syria and Iraq. ‘Syrians are the losers’ Speaking to the BBC’s Lyse Doucet in the war-torn Syrian city of Homs, Mr de Mistura said the rise of IS was “a new factor which can turn into the possibility of looking at this conflict in a different way”. Mr de Mistura said that rival sides, namely the moderate rebels and government forces, were starting to question why they were engaged in a conflict that was being taken advantage of by IS and Nusra Front jihadists. The UN plans call on all sides to de-escalate the violence through local truces to allow for the movement of humanitarian aid. “Saying having a peace plan would be ambitious and delusionary,” Mr de Mistura told the BBC. “But I do have an action plan, and the action plan starts from the ground – stop the fighting, reduce the violence. He said that first it was necessary to organise a freeze on fighting, then provide more humanitarian aid and then encourage local political dialogue. Papers in the region appear unimpressed by Mr de Mistura’s “action plan”. Some feel his proposal to freeze fighting in Aleppo aims to cover failures of policy on Syria. Commentator Nasir Munzir, writing in Syria’s state-run al-Thawra,condemns the move, saying it was offered “amid continuous US and Western confusion and failure… to bring down the Syrian state”. He writes: “The move could be a cover for US attempts to find a peaceful solution to the Syrian crisis after its terrorist methods failed.” In an article in the Lebanese liberal daily An-Nahar, Ali Bardi describes the proposal as “ironic”, wondering: “Has the international community’s aim of changing the Syrian regime become something of the past?” Saleh al-Qallab, in the Jordanian pro-government daily al-Ra’y, believes the proposal is a “desperate attempt that is doomed to fail”. Earlier, Mr Assad said his government was considering a UN truce plan for Aleppo, which is split into rebel and government-controlled areas. Mr de Mistura discussed the plans with Mr Assad in Damascus on Monday, during the envoy’s second visit to the country since his appointment in July. Local ceasefires have had some effect in other areas of Syria. Mr Assad was quoted by state news agency Sana as saying that he “considered the de Mistura initiative worth studying”. Aleppo has seen heavy fighting since July 2012. For the past year it has witnessed almost daily government air force raids, with many civilian casualties.