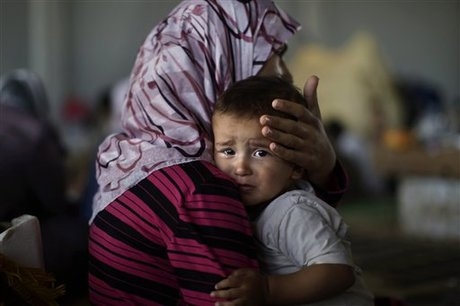 With just blankets to shield them against the icy wind and rain, Abu Ali’s family huddles in a flimsy tent in Lebanon — among the thousands of Syrian refugees struggling as winter sets in. Sixty-year-old Abu Ali is now relatively safe after fleeing the threat of Islamic State group jihadists in northern Syria’s Raqa province, but some of his 14 children are already coughing badly. They have taken shelter at an unofficial camp in Al-Saadiyeh, a village in the eastern Bekaa Valley home to tens of thousands of Syrian refugees inadequately equipped to cope with the cold. “This is our first winter here. We really didn’t expect it to be so cold,” said Abu Ali. “We have no sobia, nothing to heat us up,” he said, referring to a traditional Middle Eastern diesel or wood-powered stove that luckier refugee families have either received from humanitarian agencies, or bought with their savings. “All we have is blankets and God’s mercy,” said Abu Ali, wearing a red and white keffiyeh scarf on his head and a traditional camel-colored Bedouin robe. His family’s tiny tent is made from sheets of white plastic and planks of wood, and only has straw mats as flooring. A single battery-powered lantern hangs in the tent, so to escape the darkness, Abu Ali’s children brave the cold and rain and play outside. “I am cold all the time, but there is nothing I can do to keep myself warm, so we play anyway,” said 12-year-old Hammudi, whose striking green eyes glistened in the wind as he wandered around in plastic sandals, his feet covered in mud. The United Nations says more than half of the 1.1 million Syrian refugees in Lebanon live in substandard housing. Abu Ali’s family is among the 17 percent in informal camps, making them especially vulnerable to the elements as winter takes hold. The U.N. High Commissioner for Refugees says humanitarian agencies have provided 400,000 people with fuel vouchers or cash for November and December, but that funding shortfalls mean many refugees are left “in cold, adverse conditions”. In Jabaa, another unofficial camp in the Bekaa, the wind beats down from the hills as Umm Ali, who is in her sixth month of pregnancy, steps out of her tent. With her stomach bulging from her traditional dress, she ignores the rain as she hangs up clothes to dry. “What can I do? It’s raining all the time. We have to keep on living,” said Umm Ali, who is from Aleppo province in northern Syria. Back in her tent, she and her family sit around the sobia. But Umm Ali has a cough, like several of her 11 children, who sneeze as they try to stay warm. While they have a sobia, they don’t have the money to buy diesel fuel or wood. Instead, four-year-old Khaled puts pieces of paper on the fire to keep it going. “The kids are sick all the time, but none of them go to school, so I can’t stop them from playing outside,” said Umm Ali, her hair covered by a brightly-colored scarf. She has only been to the doctor once during her pregnancy, because she cannot afford healthcare. “When little Doaa (aged two) got sick, we spent $66 on medicine,” Umm Ali said. According to Maysam Mohammad of the British-based charity Oxfam, a pregnant Syrian woman lost her child last year after a major storm struck the Bekaa area. “Imagine you were living in a house, with all the heating and furniture you need, then suddenly you have to leave everything behind to live on farmland, with no buildings to block the wind,” she said. “Conditions of life in a tent are extremely difficult.” This year, after a dry 2013, rainfall has been heavy in Lebanon. Umm Ali’s sister-in-law, 23-year-old Rajaa, says that even if she tries to stop her children from playing in the rain, “they have to go to the bathroom — and that’s outside”. The women heat water on the sobia to bathe their children. “You can imagine how long that takes,” said Umm Ali. She said “the worst is night-time, when we all gather next to each other to sleep and the children wail: ‘I’m cold, I’m cold,'”. Source