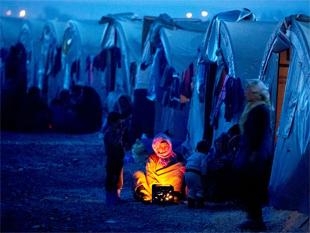 he death toll in Syria’s war was reported on Tuesday to have topped 200,000 as aid workers warned of a humanitarian crisis after the UN cut food aid to 1.7 million Syrian refugees. The Syrian Observatory for Human Rights, a Britain-based monitoring group, said it had documented the deaths of at least 202,354 people in less than four years of conflict. Most of those killed were combatants in a conflict that began with peaceful anti-government protests in March 2011 and later spiralled into a civil war. Observatory director Rami Abdel Rahman said 63,074 civilians were among the dead, including more than 10,000 children. he conflict has also displaced around half of Syria’s population, with more than three million people fleeing to neighbouring countries and beyond. Many of the refugees are struggling to survive on foreign aid and their plight was expected to get worse after the UN’s World Food Programme said it was halting food aid in the region because of funding shortfalls. “It’s going to be a devastating impact. This couldn’t come at a worse time,” said Ron Redmond, regional spokesman for UNHCR “We’re doing everything we can… to keep their shelters at least warm and as dry as possible. But you can be warm and dry, but if you don’t have food, you’re in big trouble.” The WFP said it needed $64 million (51 million euros) to fund its food voucher programme for December alone, and that “many donor commitments remain unfulfilled”. The programme helps nearly two million refugees in the Middle East, with each receiving a card topped up with money every month allowing them to buy food equivalent to 2,100 calories per day. Worst-hit in the region is Lebanon, where more than 800,000 of the 1.1 million Syrian refugees in the country were receiving WFP food voucher support. In Jordan, some 450,000 refugees will get no money this month, though around 90,000 living in the UN’s Zaatari and Azraq camps will continue to receive assistance. In Turkey and Egypt, there are sufficient funds to provide aid until December 13 but not beyond, said WFP’s Regional Emergency Coordinator Muhannad Hadi. “It’s going to be a nightmare for refugees,” Hadi told AFP. “Those people are depending on the WFP to feed them, most of them are totally dependent on us. They have no income.” Many refugees struggle to make ends meet even with international aid, and in Lebanon and elsewhere they often live in squalid informal camps, exposed to the heat of summer and cold of winter. Across the region, they also face increasing tension with host communities angry about the strain that the refugee influx has put on sparse local resources.