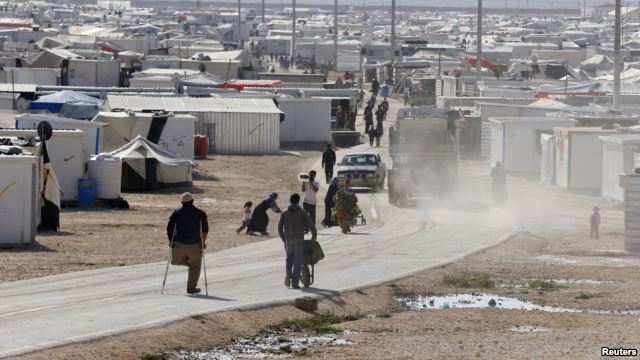 The United Nations on Monday requested $16.4 billion from its members for aid work in 2015, with nearly half of that amount slated for victims of Syria’s internal conflict and the recent rise of the Islamic State militant group. The United Nations said every year humanitarian needs grow bigger and the available resources to meet those needs grow smaller. The request is a 25 percent increase over last year’s $13 billion. It estimated about 78 million people worldwide need assistance. But because of limited funds, the United Nations has pared down the number of people it can help to 57.5 million of the most vulnerable. Four countries of concern Valerie Amos, U.N. Under-Secretary-General and Emergency Relief Coordinator, said four countries – Syria, South Sudan, Iraq and Central African Republic – will remain the top priorities next year. “These four crises alone account for over 70 percent of the funding requirements we are asking for today,” Amos said. She also cited emergency demands in Afghanistan, Somalia, the Democratic Republic of the Congo, Myanmar and Yemen. “And, if you think about what is happening in those countries, you will see that these are not second-order crises,” she said. “This is why we say we are facing needs at an unprecedented level.” The funding shortfall for the international organization and its agencies was made clear last week, when the World Food Program (WFP) announced it would cut food aid to almost half of Syrian refugees. The U.N. refugee agency (UNHCR) is holding a conference Tuesday in Geneva to discuss resettlement of Syrian refugees, which number more than 3.2 million Ahead of the meeting, 30 aid and rights groups said Monday that countries should accept 5 percent of the refugees – up from 2 percent now – helping not only the refugees but also Syria’s neighbors that have been struggling to keep up with the demands of so many extra people. Amos said millions of people have been displaced within their own countries and in countries of refuge. UNHRC reports that last year, for the first time since World War II, more than 50 million people were displaced by conflict in the world. The agency noted in 2011, 14,000 people were displaced each day. The number grew to 32,000 a day in 2013, and the agency expects the figures for 2014 to be higher. Refugee funds U.N. High Commissioner for Refugees Antonio Guterres said aid agencies must have more flexibility in using funds, especially on behalf of the many countries in the world that seem forgotten. Aid group are particularly urging governments from the Gulf region and Latin America to get involved with resettlement efforts, and for prospective host nations to prioritize taking in women, children and refugees facing threats to their safety. The groups include Amnesty International, Islamic Relief, Oxfam and Save the Children. UNHCR said Turkey and Lebanon currently host about 1.1 million Syrian refugees each. There are another 620,000 in Jordan, 280,000 in Iraq and 140,000 in Egypt. The refugees have been pushed out by a conflict that began in March 2011 as peaceful protests but then spiraled into a civil war that has left more than 200,000 people dead. In addition to the 3.2 million refugees who left Syria, the U.N. estimated the fighting has displaced another 6.5 million people within the country. Efforts to bring a diplomatic end to the crisis, including two rounds of U.N.-brokered peace talks earlier this year, have made little progress