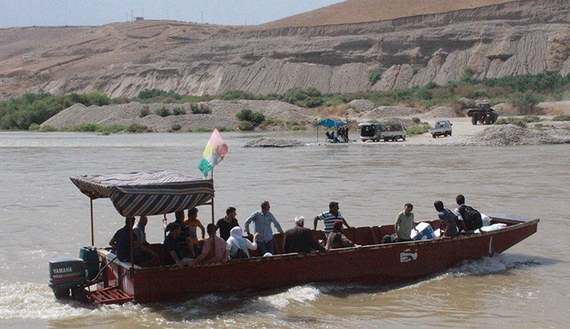 ccording to UNHCR official statistics, 214,372 Syrians, many of them Kurdish, have fled to Iraq as a result of the Syrian revolution, with 98% of them living in the Kurdistan Region. “Forty-five percent of Syrian refugees are living in the camps and 55% are non-camp residents,” Youssef Mahmoud, the public information associate at the UNHCR, told Al-Monitor. Read more: http://www.al-monitor.com/pulse/originals/2014/10/syrian-kurdish-refugees-iraq-return-economic-crisis.html##ixzz3LgERitm0 According to Mahmoud, the latest crises in Iraq have affected the situation of Syrian refugees, pushing some of them to return to their home country: “25,301 Syrian refugees have returned to Syria in legal and official ways since January 2014, and in the last 30 days, 2,027 refugees crossed the border back to Syria,” Mahmoud said. Sameer Hawaz, 24, arrived a year ago to Iraqi Kurdistan from Hasakah, Syria. He found a job, only to lose it shortly after as a result of the violence that rocked northern Iraq. Hawaz spoke to Al-Monitor at the Iraqi-Syrian border just before he headed back into Syria. “When I first arrived, I started working in Kurdistan. But I lost my job and have been looking for opportunities for six months now. It became extremely difficult to find a job as the situation is getting worse with the Islamic State [IS].” Nazha Salih, 28, another refugee, was heading back to Syria with her two children. She told Al-Monitor, “My husband returned to Syria two weeks ago because he lost his job, and I have to be with him.” The IS attack on Mosul pushed the city’s residents to flee to Kurdish areas, with many internally displaced now living in the neighboring Dahuk province. Though Dahuk is Kurdistan’s smallest governorate, according to officials, 900,000 Iraqi and Syrian refugees are now residing there, making it the largest governorate in Iraqi Kurdistan in terms of population. The Iraqi government has not established enough camps to house the internally displaced. Many have also refused to live in camps, resulting in a spike in rental prices. Mohammad Ameen, who owns a real estate agency in Dahuk, said that in the past two months, a large number of people, most of whom are from Mosul and its outskirts, have been searching for houses to rent. “The apartments that were for $400 per month are now $700, and the houses that usually could be rented for $500, now cost $800 per month. But we cannot ignore that some owners of houses did not raise the rent prices,” he told Al-Monitor. Abdullah Omer, 54 and a father of seven, also had to leave Iraqi Kurdistan and return to Syria. According to him, rent is too expensive and he did not have enough money to pay the rent and provide his children with the basics. Hussain Ali, 30, spoke to Al-Monitor while loading his bags on the boat that would take him to Syria. “I am an IT engineer. My salary was $700 and I paid $500 for rent, but the house owner then told me that I have to pay more because rents have increased. So I had to leave for the same financial reasons that drove me out of Syria in the first place. The only way for me to get out of the financial problems is to go to Turkey illegally and from there, head to Europe,” he said. Kawa Hassaki, an economist and the manager of Jagarkheen cultural center in Domiz refugee camp, told Al-Monitor that there was a trend of Syrian refugees returning to Syria following the violence in Iraq and the deteriorating economic situation. “It is normal that the Syrian refugees return to Syria, as many of them had left because of their bad economic situation. The suspension of the Kurdistan Region’s budget by the central government had a direct impact on the economic conditions of the region and halted many investment projects, causing a decrease in job opportunities in Kurdistan.” Hassaki divides Syrian Kurdish refugees into three categories: “First, those who fled from Damascus, Aleppo and Serekaniye because of the war, and came to Kurdistan. The second concerns those from Derek, Turba Spye and Qamishli. These have not witnessed any fighting, but they fled because of their bad economic situation. The last group fled because of political conflicts between Kurdish parties in Syria, especially after the PYD [Democratic Union Party] took control of Kurdish areas and applied autocratic rule with the help of the Syrian regime.” According to Hassaki, if the economic conditions in the region do not improve, the number of Syrians returning will increase. The Iraqi government’s suspension of the Kurdistan Regional Government’s budget in early 2014 and the IS attacks on the Kurdish areas early August have not only hit Iraqi Kurds particularly hard, but have made life so unbearable for Syrian refugees that many have opted to return to their war-torn country next door. Mohammed Sulaiman, 33 and from Qamishli, told Al-Monitor, “Three years ago, I came to Kurdistan. I lost my job, so I’m going back to Syria, although I know that the basic services like electricity and water are not efficient and I may not find a job there, but it is better to be in my home.” Read more: http://www.al-monitor.com/pulse/originals/2014/10/syrian-kurdish-refugees-iraq-return-economic-crisis.html##ixzz3LgEJALgD