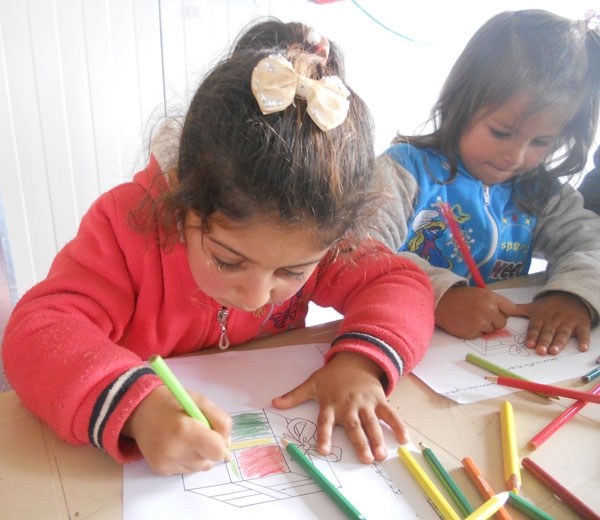 It could be the scene of an ordinary school day anywhere. Just a few days before Christmas, the younger students were making decorations and singing carols downstairs, while the older ones were taking their final exams upstairs. But for the Syrian refugee children at the Good Shepherd Social Center in Deir al-Ahmar, getting an education is something many of their young compatriots are missing”It started with a storm,” said Good Shepherd Sister Micheline Lattouf, who heads the center, as she recalled the harsh winter two years ago when hundreds of Syrian families in need fled across the border to Lebanon’s Bekaa Valley. That’s what prompted the opening of a school for Syrian refugee children in a small border town. “They kept coming, and we couldn’t say no,” she added. What began as an ad hoc solution in late 2012 to serve a hundred needy children has now become a school for more than 300 young refugees ages 5 to 14. The building itself was constructed in late 2011 as an afterschool learning center for local Lebanese children. By 2012, hundreds of Syrian families had crossed into the Deir al-Ahmar area, with little more than the clothes on their backs. There was a clear need for relief services. “We wanted them to have a dignified life, so we started with housing and food. Then we saw that the children needed an education,” said Sister Lattouf. The sisters are supported by international donors, including the New York-based Catholic Near East Welfare Association and Catholic Relief Services, the U.S. bishops’ international relief and development agency. The sisters said they plan to celebrate Christmas — complete with decorations, sweets, gifts and a Christmas play by a troupe from Beirut — with the children, most of whom are Muslim. A typical day starts at 8:30 a.m. The younger children file into the courtyard, where they gather in circles, hold hands and sing French songs, including Christmas carols this time of year. Once in class, they learn all the subjects they would have learned in Syria, but with more of an emphasis on French, the primary language of education in Lebanon. For most of these children, school is the only opportunity to have any structure or a chance at a better future. Prior to the outbreak of the civil war nearly four years ago, Syria had one of the highest student enrollment rates in the region — well over 90 percent, according to the United Nations. According to Save the Children, 80 percent of Syrian children in Lebanon who fled their country’s war are not attending school. These days, most Syrian refugee children spend their days either at home or working odd jobs to help their families meet their basic needs. Sister Lattouf said it took some coaxing for some of the families to enroll their children, many of whom had been out of school for at least a year. In addition to providing education, the center also distributes food and clothing to the local Syrian refugee community, most of whom live in tents at a nearby makeshift camp. “There wasn’t a lot of demand from families. They wanted their kids to work. We had to reach out to them by bringing them food. After the first year they saw the kids were really happy, so now there’s more enrollment,” Sister Lattouf said. While the school is a success story for the local Syrian youths, giving them a much-needed bit of normalcy during wartime, their general circumstances are far from what could be considered a normal childhood. In addition to the hardship of living in crowded camps and tents, many who fled Syria through unofficial border crossings cannot travel outside the small border town because they lack the proper paperwork to pass through the numerous checkpoints in the area. Many of them also carry with them the trauma of what made them flee Syria. Some saw people die in front of them, and some were holed up in their homes for weeks or months during fighting and air raids. Ibrahim Salloum, 12, who fled Homs with 20 members of his family three years ago and lost an entire year of school, recalled dead bodies strewn in the street. For him, doing his homework in a small tent in Lebanon is far more comfortable than his last year of life in Syria. Rana Fayad, 9, from the province of Homs, arrived with her family in Lebanon in mid-November. She recalled her area being bombarded by planes. When the violence forced her to stay home, she said, she spent her days reading Arabic schoolbooks with her mother. Ala Suleiman, 12, fled with his family from Homs shortly after he saw his neighbor killed in a bombing. He said his dream is to become a doctor, like his cousin who has remained in Syria to treat the wounded. He said he is grateful to be in school, where he is finally learning again. His favorite subject is math. Good Shepherd Sister Rita Hadchity, a social worker who returned last year to her native Deir al-Ahmar to work at the center, said her experience fleeing violence in the Bekaa Valley at the age of 5 during the Lebanese Civil War now helps her relate to the Syrian children in her care. “I feel a lot for the kids,” she said. “I remember what it was like to feel scared. I encourage the kids to open up. Thank God there’s a place for them to express themselves. It’s much better here than at the camps” where some Syrians are staying. The school also has taken on the task of teaching the children respect and nonviolence in a peace-building class they believe is essential for the day when they return home. “They will be the ones to rebuild Syria,” said Sister Hadchity. “Their dream is to return.”