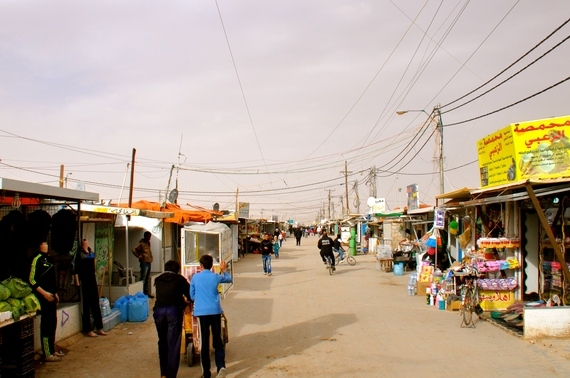 From a distance, it looks like a billowing sea of white on an endless flat plane. But, as our car approaches, the sea takes form. We are in a vast city of tents and trailers. This is the Za’atari refugee camp. With up to 88,000 Syrians in residence, it is now the fourth largest city in Jordan and the second largest refugee camp in the world. I expected to see a place of abject misery — and there was much of that. But, I also saw a startling affirmation of life and the building of a community — a testament both to the resilience of Syrians and the hospitality of Jordanians. As we walked through the camp, almost all the young boys and girls shouted “hello” — in English. Some went so far as to say: “How are you?” The adults were more guarded. Yet, everywhere there were signs of life. There is a main street in Za’atari, which runs the length of the camp. It is known as the “Champs Elysee.” The residents stroll or ride donated bicycles up and down the street, which is densely lined with shops on both sides. You can buy almost anything there: baked goods, electronics, bridal gowns, produce, shoes, appliances, hardware, toilets. There are also cafes. All of these makeshift shops are made from bits of leftover building material. We ate lunch in a restaurant, constructed of corrugated siding. Its walls and ceilings were painted in vivid hues and the entrance featured a spurting fountain on which soft drinks were displayed. In visiting one refugee family of eight, we were greeted with a colorful “Mikey Mous” cartoon painted on their caravan. We were immediately offered coffee and the children shyly gathered around. I asked the man of the house, if the Syrian civil war is not resolved soon, would he apply for resettlement or stay in the refugee camp? He said he would rather stay in the camp because it is close to home. “We breathe the same air as Syria. The Jordanians are our brothers.” But, just the day before, he told us, one of his younger daughters said to him: “I don’t want to die in Jordan. Please let’s go home.” The Syrian refugees are under strict Jordanian jurisdiction. They are policed by Jordan authorities, and while they can form community councils, they are not themselves permitted to serve in an official capacity. Jordan also has a law prohibiting refugees from working, so as not to compete with Jordanians — even as some refugees are licensed to operate their own small businesses within the camp.