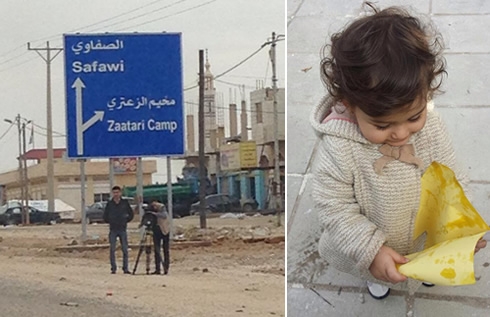 A Syrian refugee has told aid workers from Bradford that he cannot afford a banana to feed his own son. Volunteers from the Bradford-based Human Relief Foundation (HRF) charity have listened to harrowing accounts whilst in Jordan distributing aid to alleviate the suffering of refugees. Marketing and communications officer at HRF, Sarah Gate, said: “The situation is terrible. We had aid for 200 people, but an extra fifty families turned up and waited all day to see if there was anything left. We told them that there would not be, but still they waited. “They can’t work to provide for their families, so waiting is all that there is for them to do. The staff and volunteers were very sad to hear that this man, who is degree-educated and worked hard his whole life, has been reduced to telling his son that he can’t buy him a banana. It was gut-wrenching.” The aid workers also spoke to a lady who is left alone to look after her 18-month-old baby girl whilst her husband is trapped in war-torn Syria. Sarah added: “The people here are really suffering. Leaving Syria and becoming a refugee does not mean that troubles are over for them.” Today, aid workers have visited Zaatari, one of the world’s largest refugee camps. The camp opened in July a year ago with some 100 families, and is now home to over 80,000 refugees who have fled Syria’s civil war.