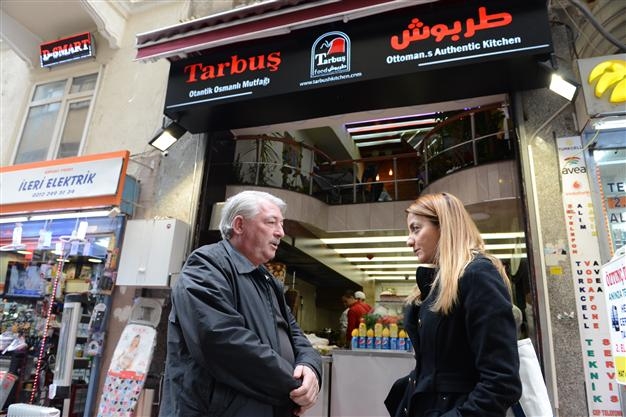 He is only one in the hundreds of thousands of Syrian refugees in Turkey who fled in the recent years from the civil war in Syria. But he has a different profile from other Syrian refugees struggling to survive on their own in a different country. Mohammed Nizar Bitar, a 49-year-old Syrian refugee cook who fled the Syrian civil war, has started his life from scratch in Istanbul, setting up a restaurant and bakery chain in the city. Bitar, a father of five, started his business four years ago by manufacturing food for other Turkish restaurants in a small basement in Aksaray. Now he owns five restaurants and two bakeries along with 22 partners, 18 of whom are Syrians. Bitar, who opened the latest restaurant in his chain in Taksim last week, employs more than 300 Syrian refugees in his restaurants and bakeries. “I used to live in Damascus and had a mosaic factory there. I also used to have a fish restaurant in the touristic town of al-Zabadani; most of the times I was cooking there myself. However, I had to close down the restaurant after the uprisings started in Syria. The regime was arresting everybody and if I had not escaped, I would have been arrested,” Bitar said. Name taken from Ottoman His first restaurant, called “Tarbuş” (meaning “Fez” in Ottoman), opened in Aksaray in 2012. “Back then, I didn’t have enough money to open a restaurant. A Syrian man I knew offered me a partnership in opening a Syrian restaurant in Istanbul. It immediately became known among the Syrians living in Istanbul. We made good money and we opened a second restaurant just across the street six months later,” Bitar said. The number of both restaurants and partners has increased over time. Bitar has opened new branches of Tarbuş in Yalova, Fındıkzade and Taksim, along with two bakeries in Fatih and Bayrampaşa where they produce lavash made from corn flour. The bakeries produce 120,000 pita breads a day and distribute to 490 different point-of-sales. “We are the first bakery to make lavash from corn flour in Turkey. I have applied to the Turkish Patent Institute for [the pita bread recipe] and received its patent. We manufacture and sell both the bread and its machine. We have now sold the machine to Algeria and Switzerland, and we are going to start exporting it soon,” he said. Bitar said 18 of his partners were Syrians and that 15 of them are refugees living in Turkey. “However, most of them don’t want to reveal their identity because they are afraid of the [Bashar] al-Assad regime,” he said. Every day at least 20 to 25 Syrian refugees come to the restaurants asking for a job, Bitar said. “We are thankful to Turkish government for embracing us, but I wish there were more job opportunities for Syrian refugees living in Turkey.”