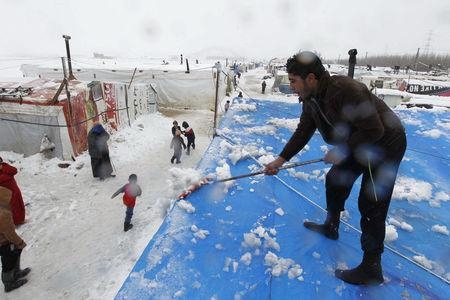 When a deadly snow storm hit Lebanon last week, Syrian refugees in the Bekaa Valley sheltered in tents made from plastic sheeting and shivered through the night. Nearly four years into the crisis, people at the snowed-in settlement near the border said they would welcome any kind of solution in Syria between warring parties so they can go home. “There are people here with no heating, some burning shoes and even tent materials to keep warm,” said Ali Abdulaziz, who said he was worried that smoke from fires fuelled with synthetic materials had made people in the camp sick. Their suffering underlines the human cost of a conflict that has displaced nearly half of all Syrians. With diplomacy to end the war at a standstill, hopes raised by the 2011 uprising against President Bashar al-Assad have long given way to despair. Abdulaziz, 45, escaped the Damascus countryside for Lebanon in April and said neither the government nor opposition fighters had done anything to stop the suffering there. “The political process is stumbling. Parties encourage each other to fight and these political games prolong the war,” he said. “May God calm the situation so that there is any political solution, we want to go back to our country.” Storm “Zina” ripped through the region last week, killing a refugee child and his father in Lebanon as they were trying to cross the border, the U.N. refugee agency said. Aid agencies warn that 7 million displaced children are at risk from the harsh winter weather in Syria and neighbouring countries. The main Syrian political opposition group said 10 Syrian refugees froze to death in Lebanon during the storm, which tore trees from the ground and blocked main roads. “When you are facing such an unprecedented snow storm, yes there are cracks in the system, there are limits to what we can do,” said Fabrizio Carboni, head of the International Committee of the Red Cross in Lebanon, adding that aid had reached vulnerable people before the storm and the worst appeared over. Lebanon is hosting around 1.5 million Syrians, giving it the highest per capita concentration of refugees in the world. The government tightened entry requirements this month, saying it could no longer manage the burden. Many refugees live in makeshift settlements like the one at Bar Elias, around 20km from the border. Some have basic shelters made from wood and plastic sheets taken from billboards. Others have rigged up satellite dishes and have portable ovens. Many residents were farmers from the Aleppo countryside and said their districts back home had changed hands many times between armed groups and government forces. Abdullah Mohammad, 45, prayed for a ceasefire in Aleppo, where the United Nations is trying to negotiate between forces fighting for Assad and insurgents, whose fighting has carved up the city. “We are for peace, any hour they announce they stop the military operations and people can live in security, trust me there will be none of us left in Lebanon,” Mohammad said. But he has little faith in any of the groups fighting in the war. “There is no difference between the opposition and the loyalists. Our country is ruined and we don’t have any help from any of them,” he said. As he spoke, children scrambled over heaps of snow, their noses red from the cold. Some wore plastic boots but others had only sandals and no coats. Families swept water from their tents into muddy open gullies that ran through the camp. “There is no wood, water runs into the tents. Come and see what is happening to us,” said a woman in her 40s who gave her name as Dalal al-Haji. “This is all I have, summer clothes,” she said, pinching a thin blue and black robe. Her 60-year-old husband Faisal pointed to his soaked sandals. “Now it is four years that people live as vagrants,” said Khadr Hamoud, 47, at the camp. “People are exhausted, hungry.”