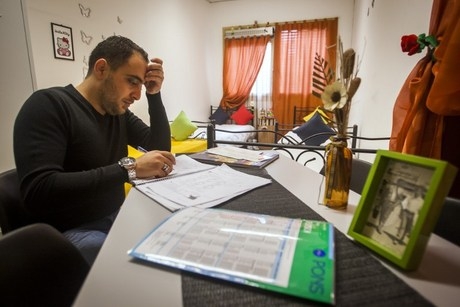 Syrian refugees are bedding down in the converted classrooms of a former Berlin high school as Germany grapples with being Europe’s number-one destination for asylum seekers. Among the newcomers is Mohammed Nabil, 28, who after a perilous land and sea journey now shares a small and immaculate if improvised bedroom with his mother, brother and sister in a working class district of the German capital. The freshly qualified engineer, who months ago fled the Syrian battlefield city of Homs, now lives with 104 other refugees in the former school, requisitioned by Berlin city authorities to house the flood of new arrivals. Germany this year expects some 200,000-asylum seekers to cross its borders — or nearly 60 percept more than in 2013 when numbers had already soared by almost two-thirds The leading country of origin is Syria, where over three years of bloody fighting have driven more than two million people to flee, mostly to Turkey, Lebanon, Jordan and Iraq. The mass exodus, and ways in which rich countries can help, will be the focus of an international aid conference in Berlin next Tuesday. Germany, Europe’s most populace country, received more than 20,000 applications for political asylum from Syrians between January and August, a 186-percent leap from a year earlier. Nabil said he badly wants to stay, telling Agency France Press that “here we feel we are human beings, because there are human rights”. “Nobody can continue life in Syria. There is nothing to eat, there is no milk for the children.” More than 2,500 kilometres (1,500 miles) away in his battle-scarred home city, a school bombing killed 48 children; most of them aged under 12, and four adults on October 1. Homs was once dubbed “the capital of the revolution” against Syrian President Bashar Assad, but regime forces have now recaptured most of the city. To escape Syria, Nabil’s family embarked on an odyssey through Egypt and Libya and then across the Mediterranean to Italy on what Mohammed described as a “death boat”. His 50-year-old mother Zarifa Abu Salem showed a photo of dozens of refugees crammed on to the makeshift vessel. Nabil said that although each passenger had paid 1,200 dollars (950 euros) for the 20-hour crossing, they were treated like animals. Once in Sicily, the family decided to press on for Germany, where they arrived just over two months ago. They spent their first night in Berlin in a park, and then went to a police station to ask for help. Nabil now spends his time working on his German language skills, writing out in a large exercise book phrases such as “Wie heisst Du?” (What’s your name?) And “Ich heisse Mohammed” (My name is Mohammed) At set times, the residents are served vacuum packed meals in the canteen, then they meet to chat in the neon-lit corridors. The school was transformed into refugee accommodation within just two days when camp beds were brought in last month. “We’re improvising,” said Manfred Nowak of the AWO public body that manages 10 asylum seeker centres in Berlin. “It’s an emergency solution so people don’t end up sleeping on the street.” Inside the classrooms, thin curtains divide off the private space of each family. Four washing machines whirr away in the former chemistry classroom, while the physics lab is soon to house a kitchen. “These people come from conflict zones,” said Jan Nadolny, who manages the emergency accommodation centre. “They arrive here, in a rich country. To have them sleeping on a mattress in a corridor is just not right.” He gave up his office recently to have extra beds moved into the room instead. Across Germany, former army barracks have been requisitioned, and tents and mobile rooms set up to house refugees. Some people have even had to sleep outdoors for a few nights in plummeting temperatures. Mohammed Nabil said he just wants a normal life, while his mother has also pinned her hopes on the country that has given them refuge so far. She dreams that her younger son, Ali, who is now at school in Ber