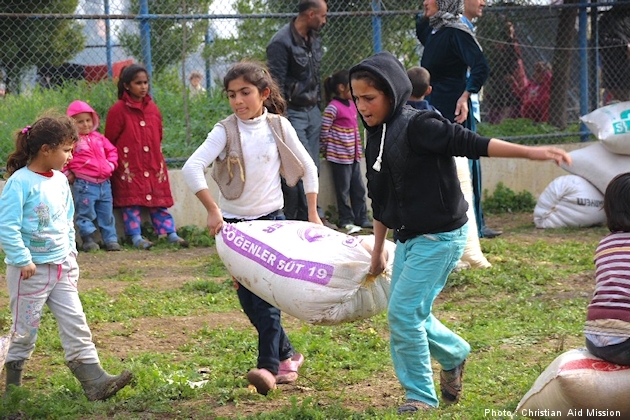 Most of the refugees in three tent camps in Adana, in southern Turkey, come from Syria, where nearly four years of civil war have been marked by ISIS militants’ demand for civilians to support their campaign to depose President Bashar Assad and establish a Sunni extremist caliphate or be tortured and killed. Half of the estimated 210,000 people killed in Syria´s civil war have been civilians, according to the U.K-based Syrian Observatory for Human Rights. Now, the United Nations estimates that of the 3.7 million Syrian refugees, around 1.5 million have fled to Turkey. “I have spoken with many families in the [73] tents, and in more than 50% of them, some family member–a husband, a wife, a brother–was killed” because they didn’t convert to Islam or otherwise didn’t meet the Islamist or political demands of ISIS or al-Qaeda-backed Al Nusra militants, said a director of a Turkish ministry bringing support to the camps. “They kidnap the girls and sell them at the bazaar. When they tell me about what they have been facing, you can see the fear and concern that it will happen again.” The ministry director continued, “They told me that when ISIS attacked, they crucified people’s corpses in the city centers so everyone can see, even children. Whoever obeys ISIS and lives like they want them to, and accepts the ISIS leader as a prophet, then they’re okay. But people are seeing that they’re cutting peoples’ heads off and crucifying them.” Many families fled under cover of darkness, leaving all their possessions behind–home, land, stores, livestock, he said. They ran to save their lives; those who could not run were left to the mercy of the merciless. At a tent city in southeastern Turkey, where refugees mainly from the fighting in Kobani have arrived, an epidemic known as “Sark Boil” is leaving lesions on the faces of many, said the director of another Turkish ministry assisted by Christian Aid Mission, your link to indigenous missions. “It has started on the kids, especially,” he said. “And it is spreading to other people quickly.” The outbreak garnered some attention in the Turkish media, and ministry members thought the publicity might elicit some aid; instead, those infected found themselves more isolated. The Turkish ministry hopes to improve sanitary conditions in the camp. The months-long fighting in Kobani left homes and infrastructure in ruins, and the director said new refugee families continue to arrive. The ministry has distributed wood and coal to help refugees keep warm, and it will need to continue doing so for at least another month. People are finding it difficult to find enough food, and the ministry needs vitamins to supplement its feeding program, the director said. “While there are so many negative things happening, there were good and positive things, too,” he said. “Children who see us, they have a smile on their faces. Families who see us, they bring their children for us to pray. And we can share the gospel with them easily.” In Adana, the ministry director said some families have quietly put their trust in Christ. “They can’t talk to anyone about it, because they are afraid other people will hurt them,” he said. The ministry distributes Bibles in Arabic and Kurdish. It has provided more than $10,000 worth of aid in its work in the 73-tent camp, and it would like to provide aid at another camp in Adana with 175 tents.