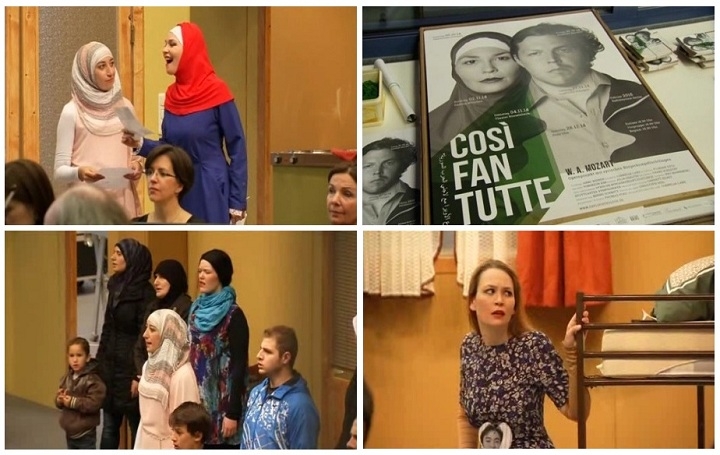 Nestled in the rural landscape of south-western Germany’s Swabia region, the 14th century Franciscan monastery of Oggelsbeuren and its tranquil surroundings are a completely different setting from war-torn Syria. However, it is here where dozens of Syrian refugees have found a temporary safe haven since they arrived in May this year, after they fled the country’s nearly four-year civil war, which according to the UN, has killed over 160,000 people and displaced millions. Now their plight will be brought to stage with a special adaptation of Wolfgang Amadeus Mozart’s “Cosi fan tutte,” one of the composer’s opera buffa set in late 18th century Naples, Italy. For the past few months, a cast of international opera singers, including the German mezzo-soprano Cornelia Lanz, who has been spearheading the project, have been working alongside some of the Oggelsbeuren refugees, weaving in their stories into the opera. “Cosi fan tutte” tackles the topic of love as played out by four main characters, who are put to test through a bet. The game gets out of control, when the four lovers discover that they have each fallen in love with the opposite partner. Director Bernd Schmitt had the idea to stage the opera in the context of a refugee’s dormitory, placing “Cosi fan tutte” against notions of silence, ignorance and boredom. “At the beginning was the idea to produce the opera ‘Cosi fan tutte,’ that’s a dream of myself since I [was] 16 years old,” said Lanz, who plays the role of Dorabella. “And our director had the idea to put the setting of ‘Cosi fan tutte’ into a refugee home, because the whole bed idea can derive from boredom and where is more boredom than in a refugee home?” she said. Lanz was immediately drawn to the project and after contacting Father Alfred Toennis, who founded the Give a Home Foundation in Oggelsbeuren, she started working with the refugees housed in the monastery. Through regular meetings, conversations and rehearsals, Lanz said she was exposed to first-hand accounts of the war which made her realize of the importance to instil a strong and clear message of peace and hope into the adaptation. “In my lifetime in Germany I have never felt the war but now sitting together, talking together, looking at movies I really, I am very touched and very hurt [about] what war does to people. And so, within this project the war is transported and we really want to make this into a message of peace for Syrians but also for the whole world, looking at Ukraine today, looking at the disbalance of the world. We really want to send a message: ‘Please hold your peace, please,” she said. With no prior experience in performing, some of the refugees were initially reluctant to be involved in the project. However, for 18-year-old Mayza Chemali, the chance to be part of this project has finally brought some excitement into her otherwise monotonous life in Germany. “At the first, beginning, I thought that Germany is not good and so boring, and we have no future here. But after the opera and after we sing our scales through the opera I saw that there’s a future for us and [I am] so excited to be in Germany and we are so lucky here,” Mayza said. Ahmad Osmani, who was arrested and detained for six months by President Bashar al-Assad’s forces, said he was also skeptical about the project at first, but Lanz’s determination eventually won him over. “Oh, this woman is serious, so let’s see what is the opera. And so we started and it was really a great thing in my life,” Osmani said. As well as performing in the opera, the refugees will also see the inclusion of some of their freedom songs in the libretto, which Osmani hopes will resonate around the world. “We are here because of war. We are asking for a peace. We are looking for a peace. We want to send a message to the whole world. We have a song, we sing it, called Janna. Janna means paradise. There is a message with the song, we want to send it to whole the world, not to Germany only, no, all the world. Our message is asking for peace. Stop war. Enough for blood. This is our message,” Osmani added.