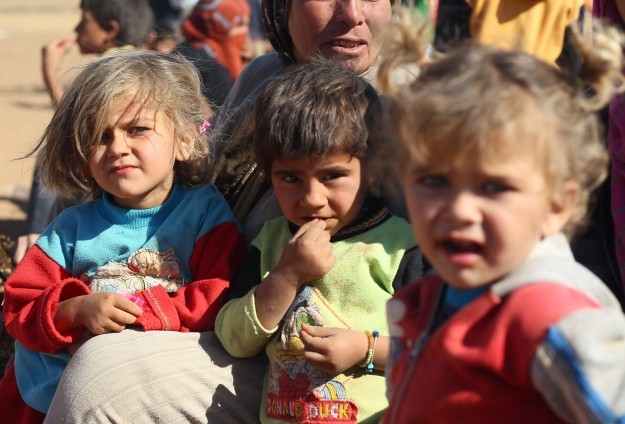 Syrian refugees in Lebanon face starvation after the suspension of a United Nations World Food Programme food voucher initiative. Under this program, thousands of poor Syrian refugees in Lebanon have used vouchers to buy food in local shops. Without the vouchers, many families will go hungry. For refugees already struggling to survive the harsh winter, the consequences of halting this assistance will be devastating. “I prefer death, we are not living as human beings,” says an old woman who came to a refugee camp from Al Qusair-Homs a year ago. “We have fled from bombs, rockets, and blood in Syria, and here we will die slowly from cold and hunger,” she said. The old woman lives in a settlement in Arsal, East Lebanon with her 8 children, where more than 50 thousand Syrian refugees are trying to survive in perilous conditions. Many children are barefoot and without proper clothing. Many tents are drenched in mud and hygiene conditions have become extremely precarious. Abu Hassan Hamwi from Hama has lived off the United Nations food vouchers with his family for the past 9 months: “We do not know how we will live without the vouchers.” Um Mohammad Bakhit, a widow originally from Al Qusair, said: “We are severely affected by the lack of aid, I have no one to support me.” Hassan Rayed, executive manager of the Union of Relief and Development Associations in Arsal, said that there was serious concern about how the closing of the food voucher initiative would affect refugees and relief efforts. Rayed pointed out that more than 60,000 Syrian refugees are currently living in Arsal. His organization manages and supports 45 informal tented settlements in the region, which house more than 1,500 Syrian families. The food parcels that the UN provided were only enough to support two thirds of the total number of families. The end of the food voucher initiative will cause a disaster in Arsal, he said, especially as winter is coming, and there is a shortage of oil and heaters. Rayed has appealed to the Lebanese government for help. He has also warned the government of the danger of the spread of disease between the Syrian and the Lebanese people in the region. Food program director Ertharin Cousin has also made an appeal to donors. “A suspension of program food assistance will endanger the health and safety of these refugees and will potentially cause further tensions, instability and insecurity in the neighboring host countries. The suspension of WFP food assistance will be disastrous for many already suffering families,” Cousin said. Cousin warned that the program’s Syria emergency operations are now in critical need of funding. Many donor commitments remain unfulfilled. The agency requires a total of $64 million immediately to support Syrian refugees in neighboring countries during the month of December.