Syrian refugees learn to help themselves 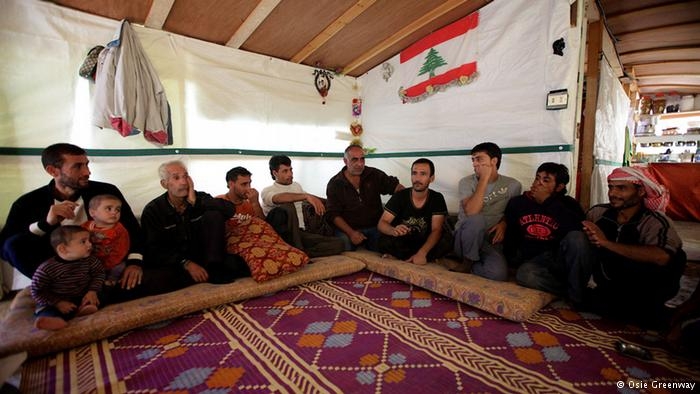 As winter approaches making life for the Syrian refugees stuck in Lebanon even more miserable, one aid agency is trying to help by encouraging them to become more self-reliant. Melissa Tabeek reports from LebanonInside “Shawish,” leader, Mohammed’s large tent, 12 men sit on the tiled floor covered with long pillows and discuss issues that affect their daily life in a tented settlement in Miniyeh, a city in northern Lebanon. Mohammed is the informal leader of this tented settlement. Today he’s joined by Norwegian Refugee Council (NRC) staff members who listen to a long list of complaints. “Bugs.” “Malnourished children.” “No electricity.” “No school.” “Have to sell food vouchers to pay rent.” “No dumpster for the garbage.” “No heat.” ” Not enough aid.” This scene looks and sounds like a typical NGO visit to assess the needs of aid beneficiaries. However, they are not gathered here to express their grievances today to NRC staff, but rather to choose the first two members of a committee that will represent the camp. It is the start of a process to train refugees how to take care of problems like these on their own called the Community Capacity Building Program (CCBP). Instead of only asking what can they do for refugees, NRC is now asking refugees, what can they do for themselves with the aid provided to them? Teaching self-reliance As part of this program, the NRC has facilitated more than 100 refugee committees in informal tented settlements throughout Lebanon, in places such as the Bekaa, Tripoli and Arsal – although due to security issues, they are currently unable to work in Arsal – since January. The members of these groups, usually comprised of 12 individuals, are appointed by their fellow residents and are trained by the NRC in essential aspects of humanitarian work, such as writing reports, stakeholder analysis, how to follow up directly with aid agencies, and the monitoring of services provided to them and their living standards.It’s called community capacity building because the objective is to capacity build the refugees in self-management, which will then lead to increased dignity and accountability through the participation. So it’s participation in the program design, monitoring and also implementation and evaluation. But not just our programming, but general humanitarian programming,” Kristin Vestrheim, NRC Camp Management Advisor, told DW. An important objective of this project is to also use these committees as a feedback mechanism, a crucial part of ensuring that the aid being given is appropriately distributed to those in need. “Even after two years, they don’t know who works there, they don’t know who distributes the water, who empties the latrines, who gave them the plastic sheeting, which is so shocking. The shocking part is, why did the agencies not introduce themselves and include the refugees in this service?,” Vestrheim said. “What we want as well is for the committee to ensure that the aid that is appropriate and not decided by some people that sit in Beirut and go, ‘This is what a donor is asking us to do so this is what we’ll do,'” she said. An alternative system The system that currently exists in the settlements is one where the power lies with the Shawish in the settlement, who makes decisions on behalf of his fellow refugees. The Shawish collects rent for the tents, and is the designated negotiator, whether it is with the landowner of the property or aid providers. NRC wants that process to change, and it is, albeit very slowly. Although the Shawish is invited to participate, these committees are made up of men, women, youth, elderly and people with special needs – voices that are not always heard because in this setting, they have not had the chance to be. According to Vestrheim, these voices are more representative than the Shawish in identifying needs within the settlement. As other organizations utilize and consult refugee committees in their work rather than only the Shawish – something NRC is actively advocating for – refugees have a chance to be represented and have an ability to take an active role in the aid they are provided. Vestrheim used a recent example of one man in the Bekaa Valley who called an NRC staff member after his first training and was able to get a latrine unblocked because he had the responsible agency’s phone number”It’s so simple. He shouldn’t even be excited about this, this is their right,” she tells DW. Harsh weather, obstacles ahead