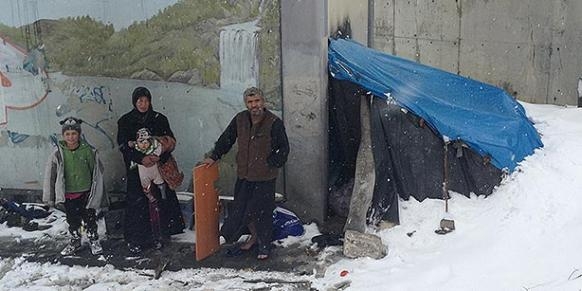 A snowstorm that began İstanbul on Tuesday has paralyzed daily life in Turkey’s most crowded city since Tuesday. Many Syrian refugees who fled to İstanbul since a civil war erupted in Syria in 2011 have been negatively affected with the heavy snowfall. Some refugees have taken shelter in subway stations, while others have been trying to keep warm in the freezing temperatures in scrappy tents they set up on vacant land or on the side of the road in various parts of the city. These Syrian refugees are trying to survive on food donated to them by their Turkish neighbors. They do not have any heating in their tents. Children and babies living in these tents are suffering from illnesses caused by the severe cold. Living in such a tent near İstanbul’s coach station in Esenler district, the Kermo family, who escaped to İstanbul from Syria’s Hama city, has been trying to survive in the snowy weather. The family has five children. Speaking with Today’s Zaman, Rima Kermo said her baby is very sick and has a high fever. “We are in a desperate situation. I have five children. We have no electricity, toilet or water. We have no money. Seven people are living in this tent. My one-year-old has got sick due to the freezing weather.” The Salih family is also trying to survive in a tent in the Esenler district. Speaking with Today’s Zaman, Ali Salih said they do not have any money to rent a house. “We are trying to keep warm by lighting a fire outside, but we sometimes cannot find any wood to burn to get warm.” According to the Prime Ministry’s Disaster and Emergency Management Directorate (AFAD), the number of Syrians in Turkish refugee camps and cities has reached 1.6 million. The Turkish government was initially praised for its open-door policy towards Syrian refugees and its humanitarian work in its camps. However, problems have arisen since only 30 percent of the refugees live in the 22 state-run camps and the government does not supply the rest who live outside the camps with shelter or food.