Syrian refugees: ‘We want to go home. That is our dream’ 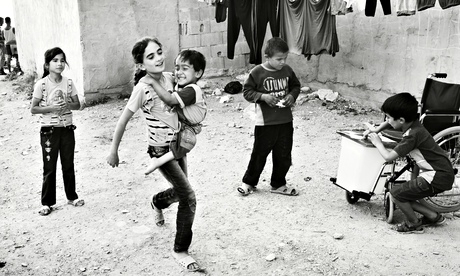 Sometimes the photographs you don’t take are as important as those you take. I’ve just been introduced to Aya, who sits in front of me on a concrete floor, small and lost, and although I’m here to photograph her it feels like the wrong thing to do. As far as possible in my work I try and see the people beyond their injuries, illness or situation; to respect them as the individuals they are. This time, I’m struggling to do that: Aya is four years old, has spina bifida and is homeless. I came to Lebanon with the charity Handicap International (HI) to document the lives of some of Syria’s most vulnerable refugees; most especially people with disabilities, many of whom are going without essential needs. It has been a difficult and harrowing trip; I’ve met many refugees throughout my career, but here I am hearing some of the worst stories I can remember. The statistics of the Syrian refugee crisis are hard to comprehend. More than 3 million Syrians have now fled the country, with Lebanon alone taking in nearly 1.5 million. In this small country of just 4 million, that equates to the population growing by more than 25% in just a few years. And that number is increasing daily. In Lebanon refugees are faced with unique problems. The government is yet to allow the UN refugee agency (UNHCR) to build an official refuge camp. As a result, those fleeing to the country are forced to rent whatever space they can, from substandard flats to garages and even cowsheds. That’s if they can afford to pay rent; many are left to build their own shelter on whatever ground they can find. There are now more than 1,600 informal tented settlements (ITS) across the country, making the distribution of support a logistical nightmare.