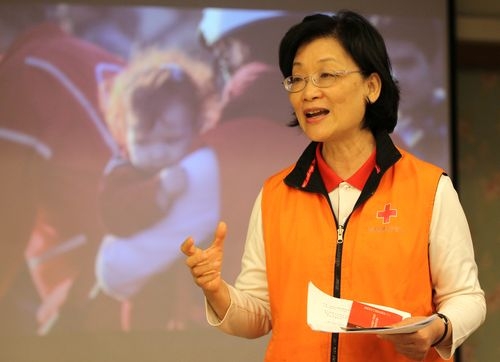 The Red Cross Society of The Republic of China (Taiwan) on Monday called for donations to purchase 10,000 food parcels for Syrian refugees who have been displaced by a civil war. More than 12 million people have been displaced and over 200,000 have been killed in the war since 2011, said Wang Ching-feng, chairwoman of the Taiwan Red Cross. She said the International Federation of Red Cross and Red Crescent Societies and the Syrian Arab Red Crescent are raising funds to buy 500,000 parcels of food, and the Taiwan Red Cross is looking to supply 10,000 of them. Each parcel contains items such as rice, sugar, salt, oil, canned tuna, canned beans and wheat flour and costs NT$2,250 (US$71) (including procurement, transportation, and distribution fees). It can feed a family of five for a month, according to Taiwan’s Red Cross. The Syrian refugees are in dire need of food, the group said, and it called on people in Taiwan to extend a helping hand. Earlier this year, the local Red Cross donated 500 diesel stoves and 1,000 food parcels to Syrian refugees, it said.