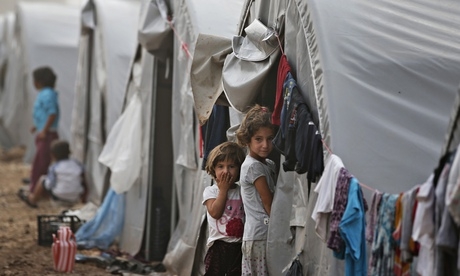 A coalition of 36 international organisations is calling on rich countries to resettle tens of thousands of Syrian refugees within their borders, saying the immediate neighbours of the war-ravaged country can no longer bear the burden of one of the worst crises of displaced people since the second world war. By the end of 2015, other countries should admit at least 5% of around 3.6 million people who have been forced to flee their homes in Syria as a result of the civil war, say the humanitarian and human rights organisations. Their call comes in advance of a UN conference in Geneva on Tuesdayaimed at getting states to pledge to take more Syrian refugees. Among the organisations making the demand are Oxfam, Amnesty International, ActionAid, Save the Children and Islamic Relief. “This is one of the worst refugee crises since world war two, displacing millions of civilians, mostly women and children. We’re counting on governments in Geneva to move quickly to demonstrate the kind of international solidarity that is desperately needed to transform the lives of the most vulnerable refugees,” said Mark Goldring of Oxfam. The vast majority of those who have fled Syria since the spring of 2011 have been hosted by five countries in the region – Turkey, Lebanon, Jordan, Iraq and Egypt – whose resources have been stretched to breaking point by the influx. According to Amnesty, only 1.7% of the total number of refugees have been offered sanctuary by the rest of the international community. “The shortfall in the number of resettlement places for refugees offered by the international community is truly shocking,” said Sherif Elsayed-Ali, Amnesty’s head of refugee and migrant rights. In Europe, Germany and Sweden have received almost 100,000 asylum applications from Syrian refugees. The UK, France, Italy, Spain and Poland have pledged to admit just 2,000 refugees between them. Britain declined to join the UN’s resettlement programme, instead setting up its own Vulnerable Persons Relocation Scheme for Syrian refugees. According to Amnesty, only 90 Syrians have been resettled in the UK. The Gulf states have not offered to take any refugees so far. “The complete absence of resettlement pledges from the Gulf is particularly shameful. Linguistic and religious ties should place the Gulf states at the forefront of those offering safe shelter to refugees fleeing persecution and war crimes in Syria,” said Elsayed-Ali. Turkey, Lebanon and Jordan have sought to impose restrictions at their borders with Syria in recent months in an attempt to stem the flow of refugees, leaving desperate families unable to escape the war. The UN has invited governments to send ministers to Geneva this week to pledge higher targets for the resettlement of refugees. The UN high commission for refugees set a goal of 30,000 Syrian refugees to be accepted by the international community in 2014, which has been exceeded. However it is now calling on states to provide resettlement or other forms of admission for an additional 100,000 by the end of 2016. Last week the World Food Programme suspended the distribution of food vouchers to hundreds of thousands of Syrian refugees after it failed to secure the necessary funding from the international community. It warned that the impact could be devastating for a displaced population facing the rigours of winter. According to Elsayed-Ali, this week’s UN conference “must be used to turn the tide. It is time for world governments to take the courageous steps needed to share the responsibility for this crisis and help avert further suffering … The apathy we have witnessed from some of the world’s wealthiest countries has been exacerbated by scaremongering over rising immigration levels across Europe. Those with the economic means to do so must play a greater role.”