Technology can save Syria’s refugees 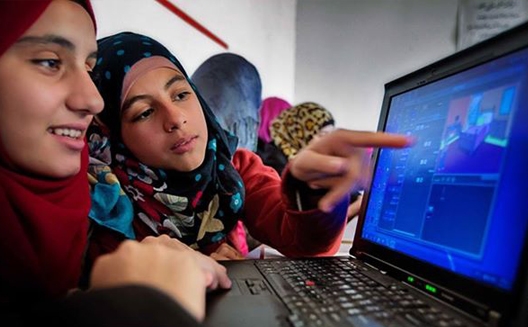 Syrians, no matter their socio-economic standing or refugee status, are far behind their regional and global peers when it comes to technological know-how. While the rest of the world was adapting to innovation and moving forward, Syrians remained isolated by the regime and the sanctions imposed on them. Now, with so many living in difficult circumstances in refugee camps and cities around the region, it’s our duty as Syrians, residents of the Middle East, and tech industry professionals to share our knowledge, to extend ourselves and help Syrians living on the edge escape their circumstances. With the right tech skills, Syrians can deliver themselves from the nightmare of the past few years. When I recieved a message from my friend Lina to go to Turkey with her organization, the Karam Foundation, to give a program about entrepreneurship for Syrian refugee kids living around the town of Reyhanli (which borders Syria), I was ecstatic. Finally, I thought, I would be able to give back to my community which has faced so much hardship in recent years. I’m not a refugee like many of the Syrians living in Reyhanli, but I also left my home behind. I left Syria three years ago, having realized my business would have greater potential if it were based in Jordan. Leaving everything I ever knew is one of the most challenging things I have ever done. Under the Assad regime in Syria, we were completely isolated from the regional startup community. There was no such thing as ‘fundraising’! I had to unlearn old ideas and start from the very beginning. I had to relearn everything about startups, the MENA ecosystem, fundraising, other markets, mentorship, and many other things. But going through this was a blessing in disguise because it was through this journey that I found myself again. When Lina told me about the kids in the refugee camp in the south of Turkey I thought I might be able to empower them in a similar way as I’ve done in the past, with the help of Oasis500 CEO Usama Fayyar, bringing Syrians to work in Jordan’s tech ecosystem. Taking into account their youth and the fact that their refugee status had left them with next to no resources, my colleague Amy and our friend Dia created a program that seeks to teach kids the basic fundamentals that make good entrepreneurs: generating ideas, presenting themselves, and creating basic strategic plans. As the bus pulled up to the camp, we heard kids chanting getting louder: ‘Karam, Karam, Karam, Karam, Karam!’ These were the opposite of the helpless and depressed refugees you see on the news; these were singing, happy kids. I didn’t know what to do, I was happy and wanted to cry at the same time. These kids are from my country. They were forced to leave their homes. I was sad, but they certainly didn’t seem it. As the program went on, the kids began to assert themselves more and remind us of their situation. One day there was a student who challenged us directly, asking “Why are you teaching us this? You will leave and we will stay here.” This stayed with me long after the program ended. I vowed to find a way to create value and impact that would stay with the kids after I’d left Reyhanli to return to my normal life. My colleagues Dia and Amy, in conversation with Kinda and Lina, agreed that we needed to build an ongoing relationship with the students, something that went beyond just a few days’ work.