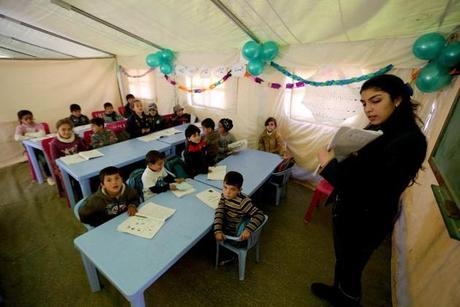 In a squalid camp in eastern Lebanon, a school in a tent with a chalkboard and brightly colored desks offers children who fled Syria’s war a chance of an education. Thousands of child refugees are studying at dozens of makeshift schools across Lebanon, including 11-year-old Faruq Salkhadi, who dreams of becoming a doctor. “It had been a year since I was last in school. My parents didn’t have the money to pay school fees here in Lebanon for my three sisters and me,” said Faruq, who is learning English, maths and Arabic. His tent school in the Qaraun area of the eastern Bekaa valley is one of 47 learning centers supervised by the International Rescue Committee (IRC) in the north and east of Lebanon. Faruq’s family fled their hometown of Jassem, in the southern Syrian province of Daraa, after their two-storey house was bombed. They are now among more than 1.1 million Syrian refugees living in neighboring Lebanon. While about 5,000 children go to IRC schools, nearly half of the roughly 470,000 school-aged child refugees in Lebanon have no access to education, according to the UN. “The NGO community here in Lebanon and the IRC are focused on filling those gaps… so we don’t lose another entire generation of students,” said IRC program coordinator Jeffrey Dow. “The alternatives for these kids are sitting around doing nothing (or) working in fields,” he told AFP. The white-colored tent where Faruq studies is the size of a house, and welcomes about 90 students a day. It is clean and warm in sharp contrast to the misery and cold that refugees suffer in their makeshift homes. Leila, a 33-year-old mother of four, lives in a nearby tent that was recently flooded in a storm. “It’s miserable here. We survive thanks to the aid we receive,” said Leila, three of whose children go to the tent school. Another woman, who wore a white veil, said the school is a source of relief. “The more educated (the children) are, the more they will become masters of their future,” said the refugee from the northwestern Syrian province of Idlib. A short drive away, another makeshift school has been set up in a building where 317 pupils aged six to 13 attend classes in 11 rooms. Like many other children, 11-year-old Mohammad remembers all too clearly the violence he witnessed before his family fled Syria’s Hama province, where his school hours had been slashed to half or even a quarter on some days. “When a warplane struck, we would rush home,” said Mohammad, who wants to learn English. “I want to be a pilot,” he beamed. Lebanese teachers and Syrian volunteers have been trained to help the children overcome psychological difficulties. “Some students like to isolate themselves, others cry when we ask them a question,” said 29-year-old teacher Abir Kharfan. “One rainy day, when thunder broke out, many children burst into tears. They said it was because they remembered the barrel bombs” that the regime uses to pound opposition areas. The children have five hours of class a day, and they follow a “light” version of the Lebanese curriculum, which should allow them to eventually gain access to the state education system. At the start of the academic year, the Lebanese authorities slashed the number of Syrian children attending state school, because classrooms were overwhelmed by a 60 percent enrolment rate among refugees. Still, aid workers praise the Lebanese government for giving 190,000 Syrian refugee children a place in school. “It’s really unprecedented for a host government to open its public schools to refugees,” said the IRC’s Dow. The difficulties of moving to a new country have been compounded by changes to the learning system. In Syria, all classes are taught in Arabic while in Lebanon many are taught in English and French. Dow said that many Syrian children aged 10 to 14 had never been to school, despite the Syrian government’s boast of 97-98 percent primary school enrolment. Alia, aged 37, said she is happy to see her four children go to school. “Isn’t it bad enough that they have no home? Should they be left without an education too?” she said.