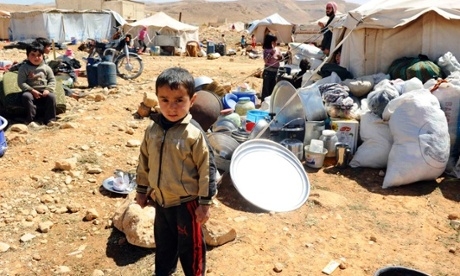 ISTANBUL // Towards sunset on the busy north-west corner of Taksim Square, Nisreem, 7, and her raggedy gang of Dom Gypsy street kids grow excited as they prepare to spend the next six hours tapping on car windows and begging passersby to appreciate that they are Syrian war refugees. Nisreem speaks, but has an impossible time staying still. She is filthy with glassy eyes and fluffy reddish hair, telltale signs of malnutrition, which makes children restless and fidgety. Darting through traffic in the heart of Turkey’s biggest city, the rest of the gang try to act a bit more together. Drug addicts, prostitutes and Turkish police lurk nearby so the gang members often huddle together for security. For fun they sometimes sing and dance. More than three years into the Syrian war nearly half the country’s population has been displaced, according to the Office of the United Nations High Commissioner for Refugees (UNHCR). More than six million Syrians are internally on the move and more than three million have fled. Nisreem and the other Dom street kids face a more complicated fate than other Syrians who are more organised in their search for a safe haven. Scholars from the Budapest, Hungary-based European Roma Rights Centre, say the Dom, who are known as the Middle East Gypsies and speak a language traced back to the Indian subcontinent, are seen as “mysterious, tragic and despised”. The gang feels this. On their corner of Taksim Square they have worn down the grass by hanging out there and worn out their welcome by begging. Many who pass see their grubby fingers and slap them away. Tonight the gang includes Zayneb, 6, and Little Ali, 5, who is as dirty and wild as Nisreem. Dunya is 11 and Amel, who tries her best to keep everyone in line, is 15. “Not everybody is mean to us but most people are. Some people give us food, but it is always junky food,” said Nisreem. In July, they escaped Aleppo, in northern Syria, before sneaking into Turkey with no paperwork. All year Aleppo has been the target of barrel bombs dropped by the Assad regime in a war that has already killed almost 200,000 people. Turkey is home to an estimated 1.5 million Syrian refugees and officials are scrambling to address the crisis. To say resources are strained is an understatement. Turkey has spent US$2.5 billion (Dh9.2bn) housing 200,000 refugees in 22 camps. But it has received only $175 million (Dh643m) in international support. During the first two years of the war, Turks were seen as generous and supportive of Syrians. But as the war has dragged on, Turks have become increasingly angered at their presence. The Dom have always lived on the edge of society, says Kemal Vural Tarlan, a researcher of Dom populations in Gaziantep, Turkey, about 50 kilometres from the Syrian border. “They face universal discrimination. Other Syrians refugees in the official camps have demanded the Dom actually stay in different camps.” According to the Dom Research Centre, before the Syrian conflict an estimated 30,000 lived in Turkey, and as many as 300,000 lived in Syria, the largest Dom population of any Middle Eastern country. Researchers admit these population estimates are sketchy. Fearing discrimination, many Dom describe themselves as Arab, Kurdish or Turkmen and also very often use fake names. They also keep on the move. After sunset, the gang went on the move as Nisreem dragged Little Ali from their Taksim corner to check on friends selling cold water nearby. Everyone else tumbled along in a tight knot of children. None of the refugees attend school, so the best thing to talk about is money. On a good night of begging, they can earn a total of about 40 Turkish Lira (Dh65). Most nights they only make 20 lira. Divided among the five of them, they each get 4 lira. When Amel and Nisreen find their pal Hamza, who is 11, they learn he has done better selling bottled water than begging. At night they return to a decrepit squatters apartment overflowing with other refugees. “The situation is very tragic for all refugees but for Domari refugees it is alarming,” said Sinan Gokcen of the European Roma Rights Centre. “They live in miserable conditions in informal camps or in abandoned buildings without access to water and proper sewage. Collecting paper and scrap metal are the main sources of income.” The UNHCR recently said women and children make up 75 per cent of all Syrian war refugees, with 50 per cent of those under 18. The gang is mostly orphaned girls and daughters of war widows. There are few male Dom relatives around to protect them. Life for the Dom gang on the Istanbul streets can also be dangerous. On September 22, a windstorm caused six storeys of scaffolding to collapse where they always beg. Ten people were seriously injured, including one street kid.