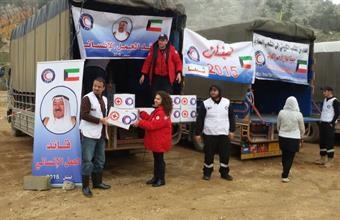 The Kuwait Red Crescent Society (KRCS) has never hesitated since the start of the Syrian crisis to provide aid and relief materials for Syrian refugees in neighboring countries, especially in Syria, Jordan and Lebanon, but such has become an unstoppable approach that included various types of food, health, medical, developmental and other aid. There is no doubt that such humanitarian aid reflects the humanitarian message of the KRCS in helping the needy in all that preserves their dignity and help them overcome their suffering, in line with the UN honoring of His Highness the Amir Sheikh Sabah Al-Ahmad Al-Jaber Al-Sabah as the humanitarian leader and Kuwait as a humanitarian center. The presence of KRCS through various aid convoys for Syrian refugees, especially in the harsh winter conditions that increase the suffering of the Syrian people has been very obvious and prominent, not forgetting the constant humanitarian donation campaigns launched by the KRCS at its headquarters in the interests of the Syrian refugees. Last year, the Kuwaiti Red Crescent provided development services for Syrian refugees in Jordan, including 1,000 circumcision cases for Syrian children, opening of a dental clinic in addition to providing five incubators for premature Syrian babies in cooperation with the Jordanian Red Crescent. KRCS is also sending 30 trucks loaded with 700 tons of relief aid, and distributed nearly 60,000 blankets, 30 tons of food, medical and health services, infant milk and nearly 60 tons of dates. Kuwait Red Crescent Society has also delivered urgent relief aid to 1,000 Syrian refugees in border-areas in southern Lebanon. The relief aid, including food packages, cleaning equipment and heating materials have been distributed to displaced Syrian families in Shabaa, Aersal, Baalbak, and Bent Jabil. The KRCS has stressed the importance of providing such aid at this time to alleviate the suffering of refugees, whose living condition have been tragic and difficult due to political turmoil and instability in Syria amid current severe weather condition. It reiterated the supportive stance of His Highness the Amir Sheikh Sabah Al-Ahmad Al-Jaber Al-Sabah, Kuwaiti government, and people towards the Syrian people, affirming KRCS’ keenness in delivering humanitarian aid directly to Syrian refugees in various Lebanese cities and villages despite all difficulties