The untold tragedy of a Syrian refugee family 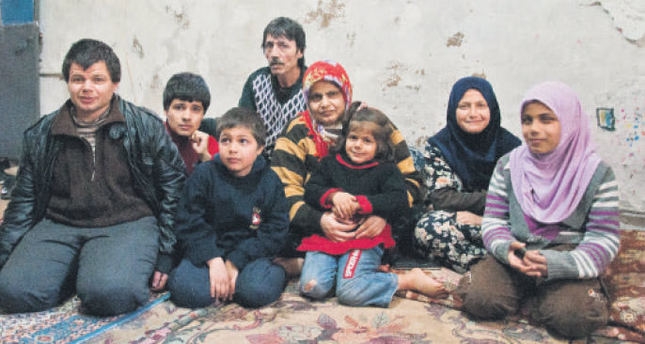 Mehmet Dipkasar opened the door to a one-room home and enthusiastically introduced his wife and children to us. The mother was preparing dinner with her six children, which was egg with parsley. There were flowers and pictures of happy children on the walls. They also had a TV that only had one channel, which was broadcasting news from Aleppo. As soon as we sat on the sofa, Dipkasar offered us Turkish coffee that their neighbors had given them. Although their youngest child is eight years old and the eldest is 20, Dipkasar said that one of his sons, who was 25, died last year in Mardin from a car crash after he’d gone out to get bread. The family has become so used to the sorrow that their facial expressions didn’t change when they remembered their brother. As a carpenter in Syria, Dipkasar said he still looks for jobs despite having a brain disease, which has yet to be diagnosed. He also added that two of the children were mentally ill and the others were too young to work; however, these little children still look for jobs so they can make a small contribution to their family. Ali Aslan, the mukhtar (mayor) of the Latifiye neighborhood, acted as a translator for us and said that the family had nothing when they arrived in Mardin. “We found this home for the family as there was no one who wanted to rent it. They pay TL 100 [$40.67] a month. Being an eight-person family, they have many basic needs that is challenging for them to meet,” Aslan said. He then described how helpful people living in the area are. For instance, the butcher of the neighborhood sometimes brings meat for them, the pharmacist provides medicine, the baker provides bread every day and their neighbors share dinner with them. They also sometimes receive money from anonymous donors. Each person helps them within the bounds of his or her ability even though the income level in general is not very high in Mardin. Pointing to the TV that showed the devastated city of Aleppo, Dipkasar said, “You watch this tragedy every day and sometimes do not believe what happens there, don’t you? But it is nothing. When I watch the scenes on the news, I realize that the reality is much worse than that.” As he started to describe the bombings, blood and people dying in front of them, his wife broke into the conversation with horror on her face: “I remember the day when a bomb exploded in front of our home, flattening the garden and walls. I do not know how we survived. After witnessing that moment, we decided that we could not stay there for even one more day.” When asked if any of their relatives or friends was in Syria, Dipkasar couldn’t stop the tears from rolling down his cheeks, “My sister is in Aleppo. I have not heard from her in two years. Even though I’ve tried everything to reach her, I could not. I do not know if she has become one of Assad’s targets too. I just hope she is alive and safe.” Trying to find a way to get to Turkey, Dipkasar decided to sell the refrigerator and washing machine. As soon as they collected the money, they left home taking only a few photos and nothing else. While they were only 3-4 meters away, one of the children realized that their home had already started to be looted, “It was incredible. The enemies around us weren’t just the forces of Assad and ISIS [Islamic State of Iraq and al-Sham], but we also had looters, rapists and thieves,” he said. Following the Kilis-Antep-Mardin route, the family eventually arrived in Mardin. Explaining his gratefulness to Turkey, he said: “There are many Muslim countries around us. Because we believed in the solidarity and fraternity of Islam, we were expecting that all of these countries would extend a hand to us. However, I was wrong. It was only Turkey who helped us as we were trying to run away from Assad’s cruelty. I cannot explain how grateful I am to these kind people and to the government.” Their homeland still struggles with war and death, and they consider themselves as “lucky” for managing to escape and find a place to live. Emphasizing that the war will not stop as long as Bashar Assad is there, Dipkasar highlighted that it is impossible for them to go back their comfortable life in Syria. After spending hours with them, I was still trying to figure out how the world shuts its eyes to these people. And considering the heartbreaking atmosphere and how millions of people have turned their backs on them, I could not believe how often they were saying “Allah’a çok şükür” (Thank God)