By now it’s clear the outpour of refugees from war-torn countries like Syria isn’t going away anytime soon. But if you needed more evidence to understand the vastness of what that means, aid agencies have asked the international community to consider the fact that this crisis didn’t start on European shores.

Rather, the chaos we see today is the aftermath of the much deeper mayhem still unfolding inside Syria.

Over four million people have fled the country since the start of the conflict in 2011, some of whom we are now seeing in Europe. But that number doesn’t even cover one of the largest and most vulnerable group of refugees — the internally displaced.

UN humanitarian affairs coordination office OCHA estimates nearly 8 million Syrian have been internally displaced by violence in the country, a number that’s shot up during the last year. The UN agency says some 12 million are in need of humanitarian assistance, often stuck in besieged areas closed off to the rest of the world.

Even as tens of thousands of migrants arrive in Greece, an August count from OCHA shows almost two million people have been newly displaced inside Syria since January 2015.

As policymakers try to make sense of what to do with Syria’s refugee outpour, it’s worth taking into account that continued violence means those numbers will only continue to swell. 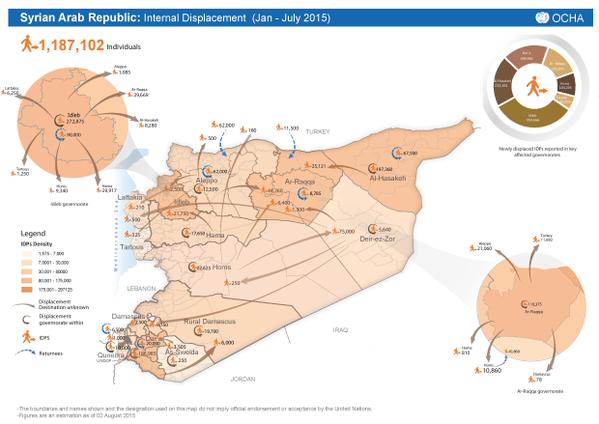