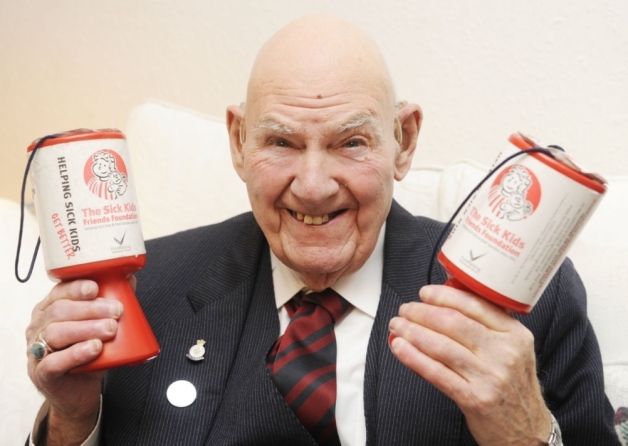 Dressed in his trademark tartan trews and rattling a collection tin, Tom Gilzean is an unmistakeable sight in the Capital – a staple of city centre fundraising for a staggering 80 years. Now 94, the former Royal Engineer has achieved a late personal best. More than half the money will be donated to his favourite charity, the Sick Kids Friends Foundation. Mr Gilzean hit his fundraising target with weeks to spare before the New Year despite a series of health setbacks including pneumonia, deep vein thrombosis and ­diabetes. He has previously vowed to continue his good work until his 100th birthday or “as long as the good Lord allows”. “I’ve got a few medical problems at the moment, but I hope I can keep collecting,” he  said. “I don’t want to stop, though it’s a bit cold at the moment. The doctors have said the medication I’m on is ruining my kidneys and I’ll have to go on dialysis in the future so that will curb my time on the street. “It’ll be three times during the week I will have to have it done which will cost me four hours each day of my time. “I’m hoping to God it doesn’t start for a while yet”. This year’s collection takes Tom’s total charity haul to more than £250,000. “The charities are always so grateful, I always know my efforts are appreciated,” he said. “I know the Edinburgh people think a lot of me. My ambition will be to get more money for my charities and if the good Lord looks after me, I will.” His staggering achievement is likely to renew calls for city chiefs to award him the Freedom of the City. Mr Gilzean insists he’s “not ­bothered” about that as he recently received the British Empire Medal from the Queen. His grandson Barry said he was incredibly proud. He added: “I would have said he has done his time protecting his country, but at 94 years  old he is still out there day-in, day-out in Edinburgh collecting and still trying to protect the people of this great country.” Maureen Harrison, chief executive of the Sick Kids Friends Foundation, described Tom as one of the charity’s “greatest ever supporters”. She said: “Come rain, shine and even illness, Tom continues to work so hard.” The former Royal Engineer, who faced Rommel’s Afrika Korps, the Imperial Japanese Army in Burma and Hitler’s Wehrmacht in France and Belgium, has already taken £12,000 to Erskine’s Personnel Recovery Centre, where a lounge has been named in his honour. The remaining money will be split between three other ­charities.