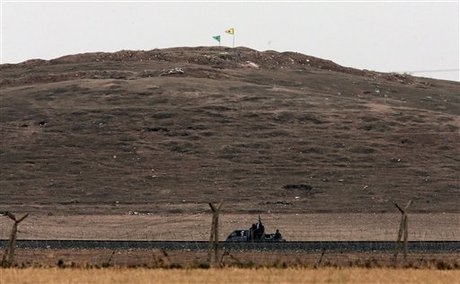 Turkish Prime Minister Ahmet Davutoglu on Friday called for a “humanitarian” safe zone to be created in an extensive section of northern Syria to host refugees fleeing the Syrian conflict. Turkey has called for the area, backed up by a no-fly zone, to protect its borders and provide some protection for refugees fleeing both the Syrian conflict and Islamic State militants who have seized swathes of Iraq and Syria. Davutoglu said the safe zone should be established on a long stretch of territory along Turkey’s more than 900 kilometer (660 mile) border with Syria, from Idlib in the west to Hasakah to the east and including the besieged town of Kobane. “Safety zones can be established in areas which have seen a flow of refugees,” Davutoglu told a briefing in Ankara. “These safe zones are humanitarian, not military,” he said. Asked about where the safe zone should be, he mentioned the main regions of northern Syria but cautioned against seeing it as a single continuous area. “Where did the refugees come to Turkey from? Jarabulus, Kobane, Tel Abyad, Idlib and Hasakah,” he said. “But it’s not limited to these cities. I tried to limit them to the areas from which refugees come.” Davutoglu dismissed maps seen in newspapers which portrayed the security zone as a continuous line stretching right along the Turkish border with Syria. “They haven’t been drawn by us or based on any diplomatic consultations,” he said. Some 200,000 Kurds have fled to Turkey to escape the onslaught on the key Syrian border town of Kobane by IS jihadists. Turkey is separately hosting over 1.5 million Syrian refugees who fled the civil war between Syrian President Bashar Al-Assad and rebels seeking his ouster. Davutoglu did not make clear if the safe zone should house just refugees from the Kobane region or also those who fled from elsewhere in Syria earlier in the conflict. Source