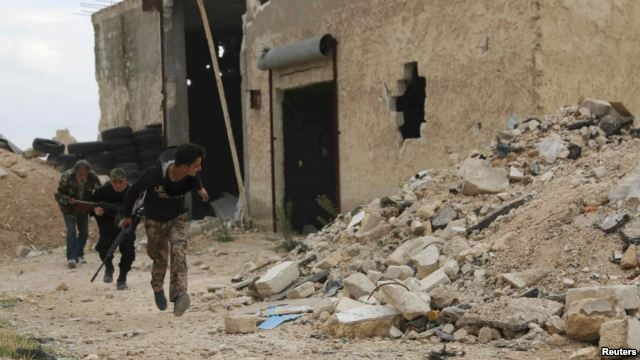 The turkish Prime Minister Ahmet Davutoglu has accused Syrian forces of committing massacres in and around Aleppo and said Turkey would face a major new refugee crisis if Syria’s second city were to fall into his hands. As U.S. warplanes bomb Islamic State forces in parts of Syria, President Bashar al-Assad’s military has intensified its campaign against some rebel groups in the west and north that Washington sees as allies, including in and around Aleppo. Ankara has been pushing for the U.S.-led coalition to broaden its campaign to tackle Assad as well as the Islamic State group, arguing there can be no peace in Syria if he remains in power. “We are watching the developments in Aleppo with concern. Though the city is not on the verge of falling, it is under extreme pressure,” Davutoglu told reporters late on Tuesday after meeting Turkey’s top generals. Aleppo, Syria’s most populous city before the war, has been split roughly in half between opposition groups in the east and government troops in the west. Assad’s forces have slowly encircled rebel positions this year trying to cut supply routes. Davutoglu said Assad’s forces were committing “large massacres” by barrel-bombing areas northeast and west of Aleppo under the control of the Free Syrian Army, an umbrella term for the dozens of armed groups fighting Assad. “If Aleppo were to fall, we in Turkey would really be confronted with a large, very serious, worrisome refugee crisis. This is why we want a safe zone,” he said. Turkey already hosts more than 1.5 million refugees from Syria’s civil war and has been pushing the United States and its allies to create a safe haven for refugees on Syrian territory. Any such move on the southern fringe of its border would require a no-fly zone policed by foreign jets. Turkish President Tayyip Erdogan has criticized the U.S.-led coalition’s focus in recent weeks on the predominantly Kurdish border town of Kobani, which has been besieged by Islamic State fighters for more than a month, and warned its attention needed to be turned to other parts of the conflict. French Foreign Minister Laurent Fabius also said this week that Aleppo, the “bastion” of the opposition, was almost encircled by Assad’s forces and that abandoning it would end hopes of a political solution in Syria’s war. Paris said it is providing military aid and training to the ramshackle Free Syrian Army, but has not given any specific details. Turkey has also agreed to help train the rebels, although it remains unclear when and where that will happen. France has echoed Turkey’s calls for a buffer zone in Syria, but the idea has so far failed to gain much traction elsewhere in the coalition. French diplomats say it is not viable without a U.N. Security Council resolution.