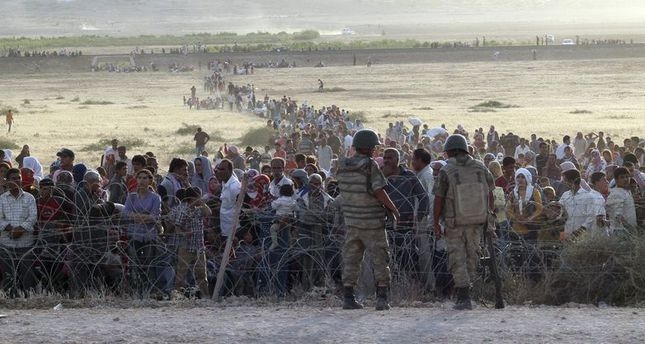 UN high commissioner for refugees says 3.8 million Syrian refugees are registered in neighboring countries. Turkey has become the country hosting the largest number of refugees in the world amid a “staggering” growth in displacement from Syria, the UN high commissioner for refugees said Thursday. In a briefing to the United Nations Security Council on the humanitarian situation in Syria, the high commissioner, Antonio Guterres, said the Syrian refugee crisis had overwhelmed existing response capacities, with 3.8 million refugees registered in neighboring countries. “Lebanon and Jordan have seen their populations grow, in the space of a few years, to a point they were prepared to reach only in several decades,” said Guterres. “And Turkey has now become the biggest refugee-hosting country in the world.” According to the UN refugee agency, Turkey is hosting over 1.6 million Syrian refugees, who have fled a civil war that has also paved the way for extremist groups such as Daesh, the Arabic acronym for ISIL, to gain a foothold in the region. Syria has been gripped by almost constant fighting since the regime of President Bashar al-Assad responded to anti-government protests in March 2011 with a violent crackdown that sparked a conflict spiraling into a civil war. Urging the international community to share the burden, Guterres said the refugee influx had severely damaged the economies of Lebanon, Jordan and Iraq. He commended a temporary protection decree issued by Turkey last year to provide Syrians with access to the country’s labor market, as well as free education and health care. “But despite this positive development in Turkey, it is no surprise that growing desperation is forcing more and more Syrian refugees to move further afield,” he said. He said Syrians accounted for a third of the nearly 220,000 migrants who arrived in boats to European shores last year. “Since the start of 2015, over 370 people have died trying to cross the Mediterranean – that’s one person drowning for every twenty who made it,” he said. He warned that thousands more could face death unless Europe decides to “step up its capacity to save lives, with a robust search and rescue operation in the Central Mediterranean.”