Turkey Moves to Close All Gates at Border With Syria 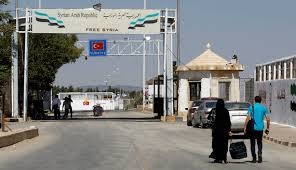 After maintaining an open-door policy throughout the four-year conflict in neighboring Syria, Turkey has moved this month to close the two remaining border gates between the countries, shutting out displaced Syrian refugees amid fears of a potential terrorist attack. The Oncupinar and Cilvegozu border gates in Hatay Province were initially closed on March 9 as a precaution against clashes that intensified in northern Syria. But while trucks carrying aid and authorized trade have since been permitted to cross from Turkey into Syria, the gates have remained closed to individuals trying to cross into Turkey for over two weeks, including Syrian citizens carrying passports. “Many Syrians are stuck inside and outside,” said Abdo Falouti, a father of five who has lived in Turkey for three years. “My mother went in a few weeks ago to renew her passport but has not been able to come back to us.” A rescue worker carried an injured baby at the scene of a reported air strike attack in Aleppo last month.Report Cites ‘Devastating Toll’ on Health of Syria’s ChildrenMARCH 9, 2014 The harbor of Side, a small resort town on the Mediterranean Sea in western Turkey and a departure point for Syrian migrants heading for Europe.Promise of Europe Lures Syrians and SmugglersFEB. 5, 2015 The closing of the gates has underscored the conundrum Turkey faces as it tries to balance a commitment to taking in refugees with security and pressure from Western allies to tighten its borders. So far, Turkey has taken in almost two million refugees from Syria, making it the country hosting the most refugees in the world, according to the Office of the United Nations High Commissioner for Refugees. The border gates have been shut sporadically throughout the conflict, but only for days at a time. Turkish officials have said that the decision to keep the crossings closed was necessary because of intelligence pointing to a terrorist plot orchestrated by the government of Syria’s president, Bashar al-Assad. “We aren’t talking about a threat from one or two people here. We have received solid intelligence about a large-scale terrorist attack, and therefore must take the necessary precautions,” an intelligence official said on the condition of anonymity, in keeping with government protocol. Officials have not said when the gates will be reopened, but they have underlined the government’s continuing dedication to its open-door policy and the resumption of normal operations. Although Turkey has recently taken steps to stem the flow of foreign jihadists through its porous 560-mile border with Syria, its efforts have fallen short of expectations from the international community, which has criticized the government for having other priorities that limit its role in the American-led coalition fighting the Islamic State. Tensions at the border have been running high in recent weeks since a Turkish soldier shot and killed a man for driving into a militarized zone, ignoring warnings to stop, in a car carrying human smugglers. Last Monday, the semiofficial Anadolu News Agency reported that the Cilvegozu border gate had partly reopened, allowing the entrance of Syrian citizens with passports subject to security controls. But representatives from both the Turkish and Syrian border gates denied that. “No one can cross legally from Syria into Turkey. Even with a passport,” said Moayad Alzreak, head of the media office for the Syrian side of the Cilvegozu border crossing. “The Turkish Army has cracked down on smuggling routes as well, so it is hard to get to the Turkish side.” A Turkish official at the Hatay governor’s office, who did not give his name because he was not permitted to speak on the matter, said that wounded Syrians were being allowed into Turkey. But Syrian aid workers complain that Syrians seeking urgent treatment for illnesses like cancer cannot get through for treatment, even with a doctor’s letter. “Ten people have died since the closure,” said Ahmad Akrama, a member of Jaish al-Islam, a rebel group fighting the Assad government. “I witnessed the death of an 11-year-old kid, who needed to be hospitalized in the emergency ward for kidney problems but died at the border.” An average of 3,000 Syrians used to cross into Turkey through the Cilvegozu border gate on a daily basis, and at least 1,000 would get through on crowded days, according to Mr. Alzreak. But now, refugees who want to flee to Turkey are left with no option but to cross illegally with human smugglers, whose main routes were recently cut off by the Turkish military. “Now we are all stuck,” said Mr. Falouti, who used to cross from Turkey into Syria frequently for business. “Sometimes I ask myself if it is possible that I will never see Syria again.”