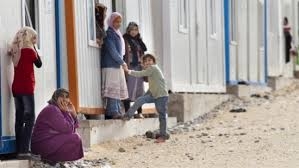 Fiscal burden on Turkey emanating from Syrian conflict amounts to $6 billion, while international contributions it received stands at $300 million, says Turkey’s UN envoy. The financial contribution Turkey has received from the international community to deal with Syria’s humanitarian crisis amounts to only one twentieth of the financial burden it shoulders, Turkey’s ambassador to the UN said Thursday. Speaking to the United Nations Security Council, Ambassador Yasar Halit Cevik said the financial burden emanating from the Syrian conflict on Turkey amounted to $6 billion, while the total contributions it received stood at $300 million. “I must stress that the current situation is not sustainable. Neither for Turkey nor for any other country in the region,” he said. Turkey has become the world’s largest refugee-hosting country, UN high commissioner for refugees, Antonio Guterres, announced Thursday. The UN Refugee Agency says the country is hosting over 1.6 million Syrian refugees, who have fled a civil war that has also paved the way for extremist groups such as Daesh, the Arabic acronym for ISIL, to gain a foothold in the region. “Syria’s neighboring countries, including Turkey, have so far assumed an unfair share of the humanitarian burden of the Syrian crisis,” Cevik said. “They should not be left alone in coping with this humanitarian tragedy which requires a genuine partnership among all members of the international community.” He said this partnership must address the refugee crisis, resilience of host communities and increasing resettlement efforts, “while at the same time bearing in mind the future human resources needs of the Syrian society for a sustainable development of post-conflict Syria.” Syria has been gripped by almost constant fighting since the regime of President Bashar al-Assad responded to anti-government protests in March 2011 with a violent crackdown that sparked a conflict spiraling into a civil war. As many as 3.8 million Syrian refugees are registered in neighboring Turkey, Jordan, Lebanon and Iraq, according to the UN.