U.N. appeals for $8.4 billion for humanitarian relief to Syrians 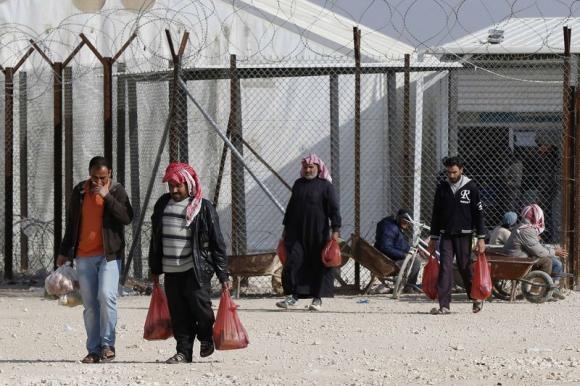 The United Nations launched its biggest ever humanitarian appeal for Syria on Thursday, seeking $8.4 billion after only securing about half the funding it asked for in 2014. The aid is desperately needed to provide help to 18 million people in both Syria and scattered through the region, as well as the countries and communities struggling to host them, U.N. officials told a donors’ meeting in Germany. Some 200,000 people have died and nearly half the Syrian population has been displaced by the conflict that began with anti-government protests in 2011 and spiralled into full-scale civil war. The number of people needing humanitarian aid has increased by 2.9 million in just 10 months. “We need a new aid architecture,” said U.N. High Commissioner for Refugees Antonio Guterres. “Syria’s war is still escalating and the humanitarian situation is becoming protracted. Refugees and internally displaced people have exhausted their savings and resources and host countries are at breaking point.” Syria’s neighbours Lebanon, Turkey, Jordan and Iraq have been cutting back sharply on the number of Syrian refugees they allow to cross their borders as they can no longer cope with the influx, according to humanitarian agencies. The U.N. requested $2.28 billion to provide relief to Syrians within Syria in 2014 but received only 46 percent of the amount. It also asked for $3.74 billion for refugees and received just 57 percent of that sum. “It is unacceptable that we have to ask the international community month after month to do their part so that people don’t have to die in the refugee camps in Jordan, Syria and Iraq,” said Germany’s Development Minister Gerd Mueller. Europe had to do more and should provide an extra billion euros, he said in Berlin, where the U.N. launched its appeal. According to the U.N.’s Office for the Coordination of Humanitarian Affairs, the United States provided 38 percent of aid funds in 2014, the European Commission 13 percent, Britain 8 percent and Kuwait 7 percent. “Conflict has devastated millions of Syrians’ lives, trapping them in conflict areas and denying them access to basic provisions and healthcare,” said Valerie Amos, U.N. under-secretary-general for humanitarian affairs. “This plan, if fully funded, can help us provide food and medicine for children, shelter families from the cold and support those who are desperate and traumatized. Syria is a very difficult and dangerous place to work but the humanitarian community remains committed to helping the most vulnerable people caught in this crisis,” she added. The U.N. Security Council on Wednesday renewed for 12 months its authorisation for humanitarian access without Syrian government consent into rebel-held areas of Syria at four border crossings from Turkey, Iraq and Jordan.