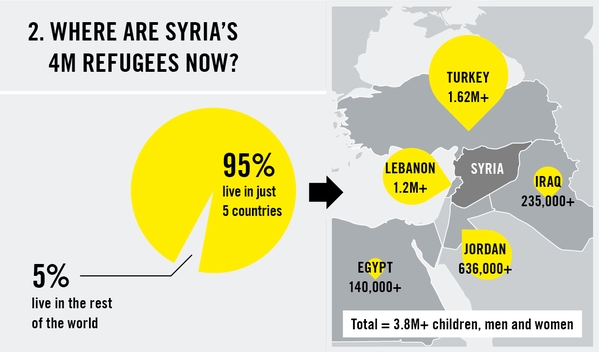 Syrians continue to face the horrors of war and displacement, the UK government has failed in welcoming its “fair share” of Syrian refugees in urgent humanitarian need, a damning report warns. The 24-page report, entitled ‘Hardship, Hope and Resettlement: Refugees from Syria tell their stories,’ was published by Amnesty International on Wednesday. It documents the horrors, hopes and dreams that Syrian refugees experience in their day-to-day lives. The report forms part of Amnesty’s #OpenToSyria campaign, which seeks to highlight the low numbers of resettlement places currently offered to Syrian refugees by wealthy nations such as Britain. While Germany has set a positive example by resettling 30,000 refugees, other European states have failed to open their doors sufficiently, Amnesty warns. Britain has offered a paltry 90 places, while Denmark and Spain have offered 140 and 130 respectively. Among those in dire need of resettlement, are gravely ill or unaccompanied children, rape and torture survivors, single mothers and minority groups, the research reveals. An overwhelming crisis Amnesty’s research compounds already compelling evidence that increased numbers of resettlement places are needed for Syrian refugees. The group’s chief of refugee and migrant rights, Sherif Elsayed-Ali, says the scale of the crisis in Syria is overwhelming. Elsayed-Ali stresses Syria’s refugees are ordinary people whose lives have been shattered by conflict. “Many of them have been through hell, they have endured heart-breaking ordeals and face daily struggles in their current lives,” he says. The UNHCR estimates almost 380,000 Syrians are in desperate need of resettlement. Meanwhile, Amnesty says 5,000 people flee Syria every day in desperate circumstances – 75 percent of whom are women and children. At present, Turkey, Lebanon, Jordan, Iraq and Egypt host 95 percent of Syria’s refugees. But as the war-torn country’s bloody crisis approaches its fifth year, these neighboring states are struggling to cope with the worsening situation. Amnesty’s report reveals wealthy nations have offered a mere 79,180 resettlement places to Syrian refugees – less than 20 percent of those who need humanitarian assistance. A glimmer of hope? According to the UNHCR’s High Commissioner for refugees, António Guterres, Syria’s humanitarian crisis is the most dramatic the world has encountered for a long time. Amnesty’s Sherif Elsayed-Ali says the prospect of resettlement can offer Syrians a vital lifeline and a “glimmer of hope for a better future.” Britain’s closed borders Over the next three years, the British government is expected to resettle several hundred Syrians in the UK. This contrasts sharply with UN recommendations. The UN High Commissioner for Refugees (UNHCR) is urging governments worldwide to offer 130,000 resettlement places to Syrian refugees in the next 12 months alone. Last month, a group of prominent UK celebrities wrote a strongly-worded open letter to Prime Minister David Cameron denouncing Britain’s resettlement program for Syrian refugees, suggesting it lacks robustness, compassion and humanity