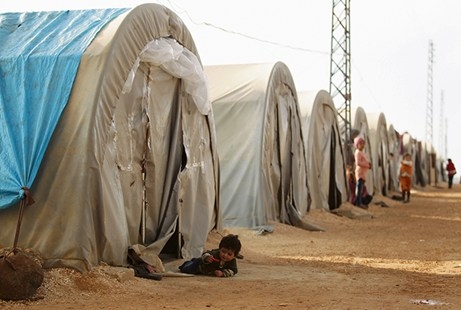 AS SYRIA’s neighbours are pushed to breaking point by the flood of 3.2 million refugees, several Church of England bishops have criticised the response by the British Government as “miserably mean”. Five bishops – Norwich, Manchester, Worcester, Coventry, and St Albans – lent their support this week to a call to the Prime Minister by more than 30 agencies, including Christian Aid, Oxfam, and Save the Children, to resettle up to 10,000 Syrians: “a modest but proportionate contribution”. The appeal was issuedin advance of a conference on resettlement to be held next Tuesday by the UN High Commissioner for Refugees in Geneva. The UN has asked member states to provide homes for 100,000 Syrian refugees during 2015 and 2016. To date, EU member states have committed themselves to hosting 33,000 refugees. Germany alone will take 28,500. On Thursday of last week, immigration figures showed that Britain had taken 90 Syrian refugees under the Government’s Syrian Vulnerable Persons Relocation Scheme, announced in March. “The UK has been miserably mean in receiving Syrian refugees, many of them Christians facing the prospect of forced conversion or death,” the Bishop of Norwich, the Rt Revd Graham James, said on Tuesday. “We must recognise the desperate plight of so many minorities in Syria. Such refugees have the sort of resilience, faith, and resourcefulness which would make them model citizens. We have nothing to fear in allowing a greater number to come to this country if they wish to do so.” “The repeated assertion that the UK stands ready to consider genuine requests for refuge and resettlement . . . looks pretty hollow,” the Bishop of Manchester, Dr David Walker, said, also on Tuesday. “Modest resettlement in Britain, along the lines proposed by our leading relief charities, is not an optional extra.” The Bishop of Worcester, Dr John Inge, said that his call in August to increase admittance “seems to have fallen on deaf ears” (News, 8 August). The Bishop of Coventry, Dr Christopher Cocksworth, said that his city had “opened its arms” to Syrian refugees. “The scheme is going well, and people on the brink of annihilation are being brought back to life. Although we have only a small number of refugees, it’s actually a large proportion of Britain’s intake so far. That only goes to show how modest the UK’s resettlement scheme is.” He warned that both Lebanon and Jordan were “near breaking point, and threatening to close their borders”. In the former, Syrian refugees, arriving at a rate of 10,000 a week, now constitute a quarter of the population. Last month, the Norwegian Refugee Council reported that, in October, 60 per cent of Syrian refugees trying to cross into Lebanon were turned away. Research by Amnesty International highlighted destitution among 1.6 million Syrian refugees in Turkey; those attempting to enter faced being pushed back and subjected to live fire at the border. The response of the international community to the “world’s worst refugee crisis in a generation” had been “an abject failure”, the charity said. The Government appears unlikely to improve its commitment to resettlement. A Foreigh Offfice Minister, Tobias Ellwood, said on Tuesday that “it is best that refugees are kept closer to the region so that they can return.” He spoke of the £273 million provided by the Government “to help with stability in the area and to support refugees there”. A similar response was given in the House of Lords. After hearing the international-development minister Baroness Northover argue that the UK was “contributing disproportionately in supporting those in the region”, the Bishop of St Albans, Dr Alan Smith, said that the Government must “expedite the arrival of refugees much more speedily”. Dr Cocksworth agreed. “It would be a tragedy if it were to say to suffering Syrians, ‘There is no room in our inn.'” Question of the week: Should Britain accept more Syrian refugees? Money runs out for refugees’ food A FUNDING crisis has forced the UN World Food Programme (WFP) to suspend food vouchers for more than 1.7 million Syrian refugees, writes Madeleine Davies. It warned in September that it had no money for programmes in December. A statement said on Monday that many donor commitments remained “unfulfilled”. A total of $64 million is required immediately to support Syrian refugees in neighbouring countries this month. The voucher programme has injected $800 million into the economies of neighbouring countries hosting Syrian refugees since 2011. The vouchers can be used to buy food in shops in Jordan, Lebanon, Turkey, Iraq, and Egypt. The suspension of the programme is expected to be particularly severe in its impact in Lebanon. The executive director of the WFP, Ertharin Cousin, said on Monday that the freeze on vouchers would have a “disastrous” impact on refugee families, and could cause “further tensions, instability, and insecurity” in the host countries. The UN High Commissioner for Refugees, António Guterres, said that the news “couldn’t come at a worse time. Winter is already an extremely difficult period for Syrian refugees, but the suspension of food assistance at this critical juncture is going to be devastating.” A spokeswoman for the WFP said that it had stockpiles of food that it was sending inside Syria, but that these would run out in Jan- uary. World Vision’s regional response director for Syria, Wynn Flaten, said on Tuesday that the charity was “urgently working to plug funding gaps” emerging as a result of the WFP’s announcement. “We are particularly concerned that security may deteriorate.”