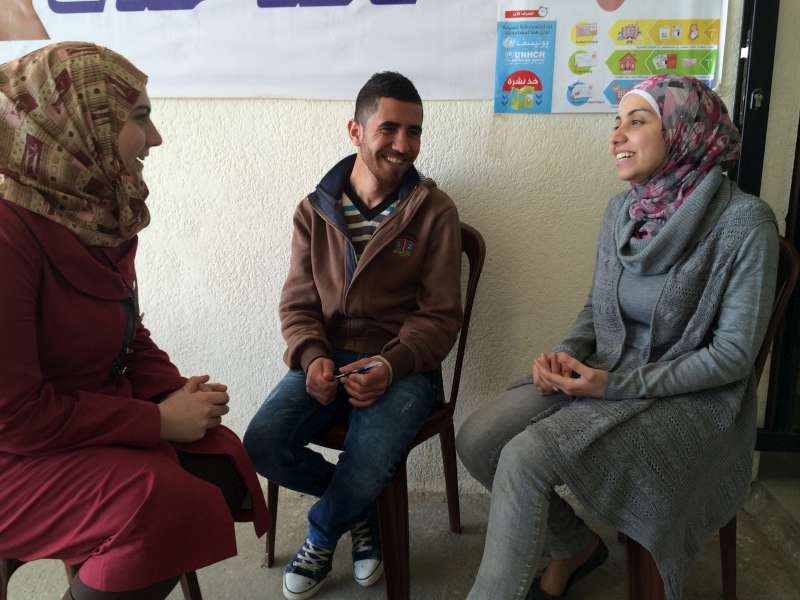 n the town of Wadi Jamous in North Lebanon, a two-story concrete structure buzzes with the energy of mingling boys and girls, women and men from Lebanon and Syria. Six short months after its establishment, this UNHCR community centre has turned into a daily meeting point for refugees from Syria and their Lebanese hosts who were longing for a space where hope can grow. “You can sense some tension between Syrian refugees and locals in Akkar, but this centre has played a key role in bridging the growing gap and fostering dialogue between the members of the two communities,” said Zaher Obeid, head of the Hadatha Association, who, along with the Danish Refugee Council, runs programmes at the centre. With 1.2 million registered refugees, Lebanon hosts the highest number of refugees per capita worldwide – one in four of the population is a refugee. Refugees in some towns and villages now outnumber local residents, fuelling tensions as they compete for access to basic resources and services such as water, electricity, healthcare and education. Over 1,700 refugees live in Wadi Jamous, a town of some 8,000 people. In the centre’s playground, teenagers gather to showcase the products of the photography workshop they just completed. Razan, a 15-year-old girl from Halab, proudly explained one of her shots: a hand tightly gripping barbed wire. “This is the hand of a Syrian refugee student I know who, despite the freezing cold a couple of months ago, insisted on going to school,” she said. “This picture captures his hand gripping barbed wire as though clinging to life itself.” Her Lebanese friend captured snow resting on bare branches of a tree next to her house. “White is peace,” she explained. The centre’s bustling hallways lead to classrooms where children and adults are learning sewing, hairdressing, English, literacy, computer and other subjects. “The youngest student in my class is seven and the oldest is 47,” said the computer class teacher. Literacy classes also brought together Maha, 40, from Syria, and Hayat, a 32 year-old Lebanese woman who instantly found things in common with her new friend. “I felt that events in Maha’s life mirrored events in mine and I was drawn to that,” Hayat explained. “She lost her husband in the war and I happened to have lost mine. Grief might have triggered our friendship but also our thirst to change, to do something with our lives.” Maha echoed her sentiments: “Education is the light. I was able to find a job because of the classes I attended; having an education can really change your life.” Nearly 140 people attend skills-training and various recreational activities at the centre every day. Parents worried about their children come seeking advice; teenagers socialize and make plans; children play. There are over 25 such centres across Lebanon. Some predate the crisis but most were established because of it, fostering a much-needed sense of community for both Syrians and Lebanese.