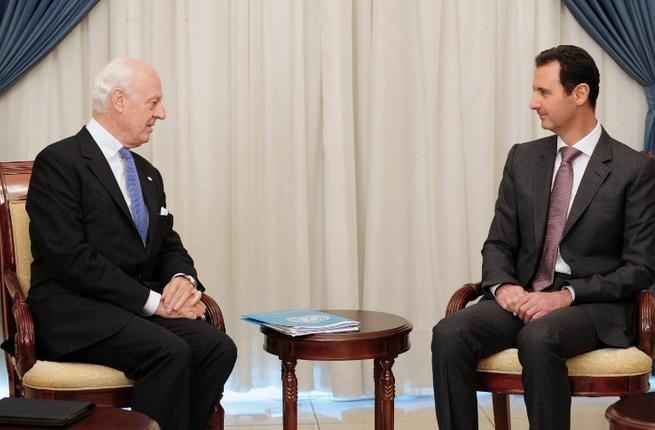 A senior UN officialshas arrived in Syria to organize talks between the Damascus government and foreign-backed militants with a view to ending war in the largest city of Aleppo. Ramzi Ezzedine Ramzi, deputy to the UN Special Envoy to Syria, Staffan de Mistura, touched down in Damascus on Saturday and is scheduled to hold a series of negotiations with Syrian officials and militants in the coming days. Earlier this week, de Mistura held “constructive” talks on Aleppo with representatives of armed and non-armed groups in Gaziantep, Turkey. The veteran Swedish-Italian diplomat announced his plan to press for what he referred to as a “freeze” in fighting in late October, following unsuccessful efforts to negotiate a resolution to the foreign-backed militancy in Syria. Syrian President Bashar al-Assad has expressed his willingness to discuss the plan to cease skirmishes in the major northern city of Aleppo, situated 310 kilometers (193 miles) north of the capital, Damascus. The flashpoint city has been divided into militant and government-held territories since July 2012. De Mistura has been pressing for local ceasefire in parts of Syria to lay the groundwork for peace talks. Syria has been grappling with a deadly crisis since March 2011. Western powers and their regional allies — especially Qatar, Saudi Arabia, and Turkey — are the main supporters of the militants operating inside Syria. More than 200,000 people have died so far in the conflict in Syria, according to UN High Commissioner for Human Rights Zeid Ra’ad Zeid al-Hussein. Over 7.2 million Syrians have also become internally displaced due to the ongoing Syrian crisis, according to the UN. The UN High Commissioner for Refugees (UNHCR) says more than two million registered refugees have taken shelter in Turkey and Lebanon, adding that several countries, including the Persian Gulf Arab states and Latin American countries, have not accepted any Syrian refugees.