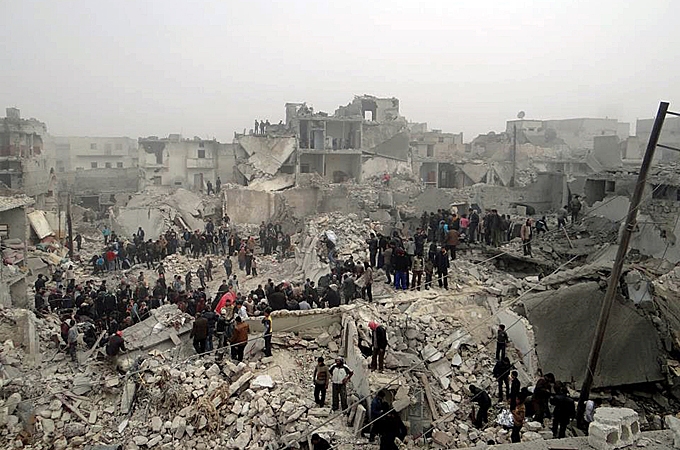 UN peace envoy Staffan de Mistura has presented an “action plan” for Syria, proposing to “freeze” fighting in local areas to allow for aid deliveries and to lay the groundwork for talks. De Mistura told reporters after meeting with the UN Security Council on Thursday that he did not have a peace plan but rather “an action plan” to ease suffering from the more than three-year war in Syria. The envoy said the divided city of Aleppo would be a “good candidate” to become a “freeze zone”. He did not describe in detail how it would work but said that agreement on a local level would be needed to suspend fighting. “It should be something that freezes the conflict in that area and gives an opportunity for some type of humanitarian improvement and for the people to feel that, at least there, there will not be this type of conflict,” he said. Aleppo has been divided since a rebel offensive in summer 2012 between government-controlled sectors on its west side and rebel territory on the east. The envoy said the “horrific trigger” of the offensive should provide an opportunity to “move forward” and seek ways to end the war that has killed more than 180,000 people and forced millions from their homes. De Mistura was reporting to the 15-member council after making key visits to Russia and Iran, two countries that have influence with President Bashar al-Assad’s regime, and to Damascus last month. Appointed in July, the Italian-Swedish diplomat is the third envoy tasked by the UN with brokering a peace deal for Syria. Syrian Ambassador Bashar Jafaari said his government was ready to give the envoy’s proposals “due consideration” and that he would hear more about the plan during a meeting on Friday. Council members were cautiously open to the idea which could be the first steps toward a national dialogue, but requested more details, according to diplomats. Concerns were raised over whether the Assad regime would use the pause in ground fighting to launch more bombing against civilians and gain the upper hand over opposition forces. “We have to start somewhere,” said De Mistura who acknowledged that while this may be only “a drop” in the peace process, “many drops can produce a lake and a lake can produce a sea.” The Council heard from senior UN aid official Kyung-wha Kang that the humanitarian crisis was worsening, with “millions of Syrians forced to live in appalling conditions where there is no safe refuge”. “Tens of thousands of Syrians were forced to flee their homes again this month, many of them for the second or third time.” Despite a UN resolution authorising cross-border aid deliveries without Syria’s consent, Kang acknowledged that UN agencies were “still unable to deliver sufficient quantities of aid to people in the hardest to reach areas”.