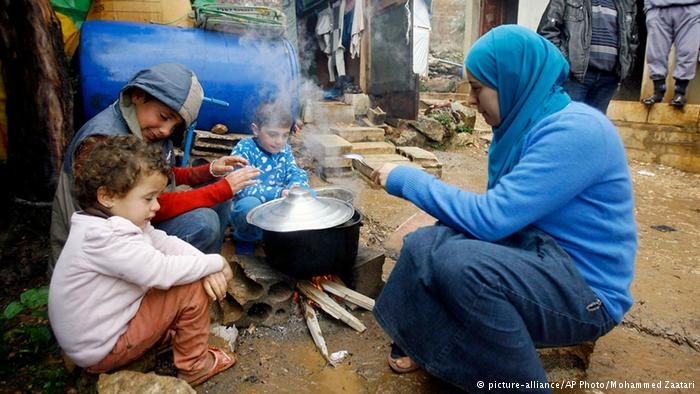 The UN humanitarian and refugee agency is considering a new course in the refugee crisis created by the war in Syria. At a conference in Berlin on Thursday (18.12.2014), representatives will discuss how to coordinate short-term emergency assistance and long-term structural help more closely. They are also expected to announce financial budgets for projects in Syria and neighboring countries. German Foreign Minister Frank-Walter Steinmeier and Development Minister Gerd Müller will welcome the delegates from UN member states and NGOs in Berlin. UN High Commissioner for Refugees Antonio Guterres and the UN Development Program (UNDP) will present their new regional plan for refugees and strengthening structures. The aim of the plan is to better integrate the various factors: the Syrian refugees, the populations and governments of host countries, international donors, and the over 150 development and emergency relief organizations. This plan, the UNDP said, represents a change of strategy. Unlike earlier conferences, long-term structural assistance in the region will play a bigger role. That means not only distributing water bottles, but increasingly installing water mains. If schools or wastewater facilities are built, they should in future not only benefit the refugees, but also local populations. This means development cooperation in dealing with the humanitarian crisis is becoming increasingly important. The main reason for this change in strategy is that there doesn’t seem to be an end in sight to the war, which has already gone on for four years. Beyond that, the UN Emergency Relief Coordinator Valerie Amos will use the Berlin conference to present her plans for inside Syria in the coming year. During a similar conference in October, 50 NGOs demanded in a joint statement that long-term international help be set up. Infrastructure overloaded The UN aid agency has described the Syrian situation as the worst humanitarian crisis worldwide. According to the organization’s figures, around 11 million people are dependent on aid because of the ongoing war, half of them children. Over three million Syrians have fled the country, mostly to Lebanon, Jordan, Turkey, and Iraq, and the infrastructure in these countries, along with social and educational institutions, are hopelessly overloaded. Syrian refugees now account for around one fourth of the population in Lebanonuterres said last week in Geneva that protecting those who have fled the war was a matter of saving lives, but he added that it was also important to show solidarity with neighboring countries that have received the millions of Syrians. According to figures by Germany’s federal development ministry, Germany has allocated 800 million euros ($1 billion) for aid in Syria and in the region so far. But, officials insist, the meeting at the German Foreign Office in Berlin is not a donor conference in which countries agree to donate a certain amount of money. Instead it will present an assessment for next year and possibly the year beyond that. Where the money will come from for the various measures and projects is to be discussed in another conference at the beginning of 2015.