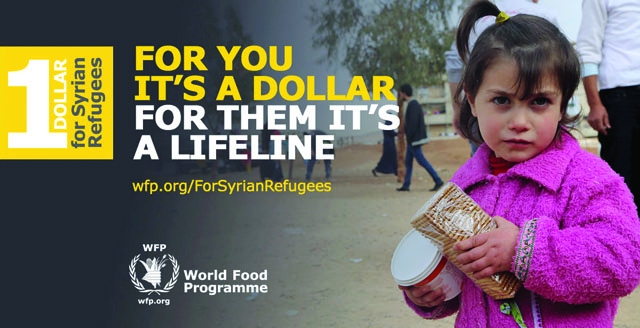 With the start of the second month of the year, the UN agency has not received enough funds, which will lead to maintaining the plan implemented in January 2015 and providing reduced allocations for food vouchers to refugees living among host communities, according to WFP Spokesperson Shaza Moghraby. Moghraby declined to comment on how much money the WFP has received so far, only saying that there is still a shortfall in funds. Thus, she explained, “we will continue giving refugees outside the camps JD13 per person per month instead of JD20,” as provided to them last month, while Syrians in the official camps will continue to receive the same monthly allocations of JD20 per person. In November last year, WFP announced that it had been forced to suspend a critical programme providing vouchers to more than 1.7 million Syrian refugees in neighbouring countries. In the Kingdom, 440,000 out of more than 620,000 registered Syrian refugees were affected by the suspension. Those living in camps were excluded from the decision. The UN agency resumed the programme in mid-December after launching impromptu fund-raising campaigns and receiving donations to cover one month’s needs. In previous remarks to The Jordan Times, Moghraby said WFP conducted a market analysis to re-evaluate the food voucher project and decided to reduce allocations for Syrians residing outside the camps. She said that before the suspension of the programme, the agency used to give Syrians in host communities JD24 per person per month and this was reduced to JD13 after donations were received in December. Although the agency will not keep the allocation at JD13 if the required funds are secured for 2015, it will not pay them JD24, according to Moghrabi, who noted that the amount will be reduced to JD20. Citing the market analysis, the WFP spokesperson said it showed that refugees can obtain the items they need at lower prices from the markets that have contracts with the agency.