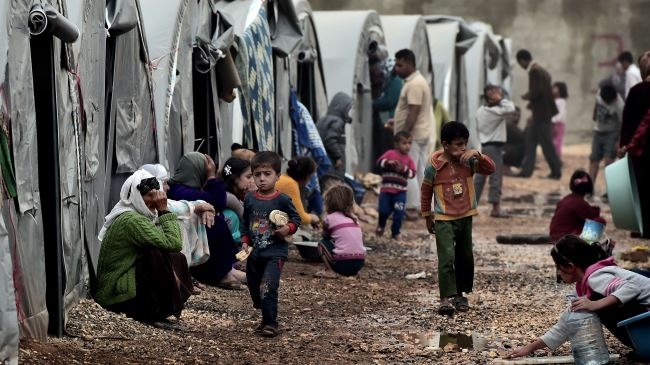 Two international refugee organizations have criticized the US and European states for admitting only a tiny number of the people displaced by the war in Syria. In a report released on Wednesday, the International Rescue Committee and the Norwegian Refugee Council said the plight of the displaced Syrian people has reached “a new level of hopelessness.” The report said that the US and European countries need “to do more, and quickly” in accepting Syrian refugees. It said the US had accepted just 166 Syrian refugees by the end of September, while Britain a few hundred. France has said it will accept just 500 displaced Syrian people. This is while international refugee organizations have called on developed countries to accept at least five percent of Syria’s refugees. “We are witnessing a total collapse of international solidarity with millions of Syrian civilians,” Secretary General of the Norwegian Refugee Council Jan Egeland said. The report said that Syria’s neighbors, with overstretched resources, make it additionally difficult for civilians to leave. Thus, the number of refugees has plunged drastically, the report said. Last month, more than 18,000 refugees registered, compared to the monthly average of 150,000 registrations in 2013, according to the report. Syria’s neighbors, including Lebanon and Jordan, have warned that they have reached their threshold for accommodating the displaced Syrians. Lebanon has already begun rejecting all, but “exceptional” refugee cases. So far, about 3.3 million civilians have fled the violence ravaging Syria. “In September and October 2014 alone, Turkey received 190,000 refugees, far more than the entire international community has committed to resettle since the start of the Syrian conflict,” the report said. The aid groups also called on the international community to rush urgent humanitarian aid to Syria’s neighbors. Syria has been gripped by deadly violence since 2011. UN High Commissioner for Human Rights Zeid Ra’ad Zeid al-Hussein has said that more than 200,000 people have died in the Syrian conflict since March 2011.