USA will Accept Thousands of Syrian Refugees for Resettlement 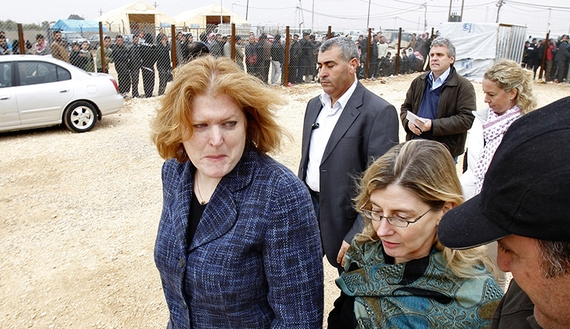 US Assistant Secretary of State for Population, Refugees, and Migration Anne Richard says the United States will dramatically increase the number of Syrian refugees allowed to resettle permanently in the United States from about 350 this year to close to 10,000 annually as the crisis grinds on into its fifth year. While the number is minuscule given a total Syrian refugee population of 3.3 million, it reflects US recognition that the civil war in Syria is not about to end anytime soon and that, even when it does, Syria will need years for reconstruction and reconciliation. In an interview with Al-Monitor Dec. 22, Richard said, “People are surprised we haven’t taken more.” She said the initial low numbers reflect the reality that “resettling refugees is never the first thing you do when people are fleeing an emerging crisis” and that other countries — in particular Germany and Sweden — have “stepped forward and offered to take a lot” of Syrian refugees. According to the UN High Commission for Refugees (UNHCR), Germany has pledged to absorb 30,000 Syrians just since 2013 — nearly half of those processed for resettlement. “We thought that was a great offer and unusually generous so we encouraged UNHCR to take advantage of that,” Richard said. After initial vetting by UNHCR, Syrian refugees who want to resettle in the United States must be interviewed by officers of the Department of Homeland Security at US diplomatic facilities in Amman, Jordan or Istanbul, Turkey. That leaves out a million Syrians who have fled to Lebanon and large populations in Iraq and Egypt. Richard said lack of space and security concerns have kept the United States from interviewing Syrian refugees at the US Embassy in Beirut but that US officials are looking at the possibility of setting up a refugee vetting operation in the Kurdish region of northern Iraq.