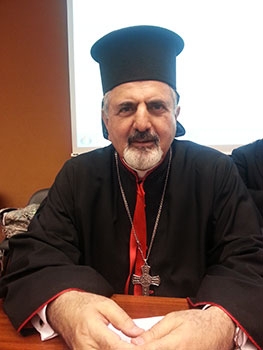 DURING a visit to Europe, the head of the Syriac Catholic Church hit out at politicians – saying they have ignored displaced Christians in Iraq as they are of no economic value to the west. Speaking to the Catholic charity Aid to the Church in Need during a visit to Paris, Patriarch Joseph III Younan of Antioch and All the East said that the western world had been largely silent about the situation facing Christians in northern Iraq. He said: “The international policy makers have other policies when it comes to minorities, who have neither the numbers, nor riches to make them attractive. And we have no oil – that is to say, we do not offer any economic advantages.” Explaining why he had come to Europe, he said: “I am here in France and Europe to bring the voice of these communities who were persecuted, forced into exile and deprived of everything because of their Christian faith. “Unfortunately the supposedly ‘civilised’ Western world is rather silent.” Speaking about his visit to Iraqi refugees in Kurdistan, he described some of the problems facing the displaced Christian families. The Patriarch said: “Morale has become very low. For months refugees have been living in this humanly unbearable situation – they have absolutely nothing. “Winter has begun, and they don’t have help from humanitarian agencies, and sometimes they feel humiliated. “For example two weeks ago food crates were distributed but in one box they found a dead mouse. Imagine the people’s reaction. “They used to live normally, they had their homes, their jobs, their church and they have become, through no fault of their own – just because they were Christians – refugees in their own country, without resources. “We are going through a very, very tragic time.” Patriarch Joseph stressed that the region did not have the resources to provide for the needs of the displaced including housing, food, medical care, and schools – estimating that up to 140,000 Christians had fled. The Catholic Bishops’ Emergency Committee in Iraq has been addressing many of these needs, and in addition to ongoing provision of food and shelter is now putting in place longer-term projects to provide education. Aid to the Church in Need has backed this latest phase of their emergency help with €4 million (more than $5.8 million). But a number of Iraqi refugees have made their way to other countries in the Middle East, such as Lebanon where, according to the country’s Social Affairs Minister Rashid Derbas, there are more than 8,000 Iraqi refugees. This includes Iraqis who fled before the current crisis. On Wednesday 3rd December Aid to the Church in Need announced a €80,000 (more than $115,000) aid package for 360 Iraqi refugee families in Lebanon being looked after by the Syriac-Catholic Patriarchate. The aid will provide shelter, food and clothing for more than 1,500 refugees. Underlining the scale of the threat to Iraq’s Christian community the Patriarch said: “We were threatened with eradication five months ago when Mosul was invaded by terrorists imposing the Shari’a. “The same thing happened more than two months ago on the Nineveh Plain. “We, the Syriac Catholic community, were greatly affected. We left everything. We are refugees in our own country. “So today we must continue to give refugees the confidence and courage, the hope one day they can return home – but that day seems more and more unreal and that’s what makes morale increasingly low. He added: “We need the international family of nations to take concrete steps to provide justice to refugees and they can return home safely.” The Patriarch finished by praising the work of Aid to the Church in Need: “I would like to express my deep gratitude to the benefactors of ACN for their help for the Christian victims in northern Iraq.” Syriac Catholics number about 180-200,000, and are present in Iraq, Syria and Lebanon. Over the last 20 years, 60 percent of Syriac Catholics have fled to other countries.