Why Syrians are risking everything to reach Europe, explained in 9 devastating photos

It took an image to wake up the world to the Syrian refugee crisis. The chilling photograph of toddler Aylan Kurdi’s body washed up on the Turkish shores, after a failed attempt to flee to Europe, forced people to start thinking about what it meant that 4 million Syrians had become refugees — and what needed to be done to help them.

But what people might not understand is just what they’re fleeing from. The situation in Syria is truly dire: The civil war has killed more than 250,000 people since it began in 2011, and forced about half of Syria’s 22 million people from their homes. What that looks like, in practice, is nearly unimaginable: entire neighborhoods leveled, and millions of people living in squalid, dangerous conditions. These nine photos illustrate just how bad life has gotten for many Syrians today. 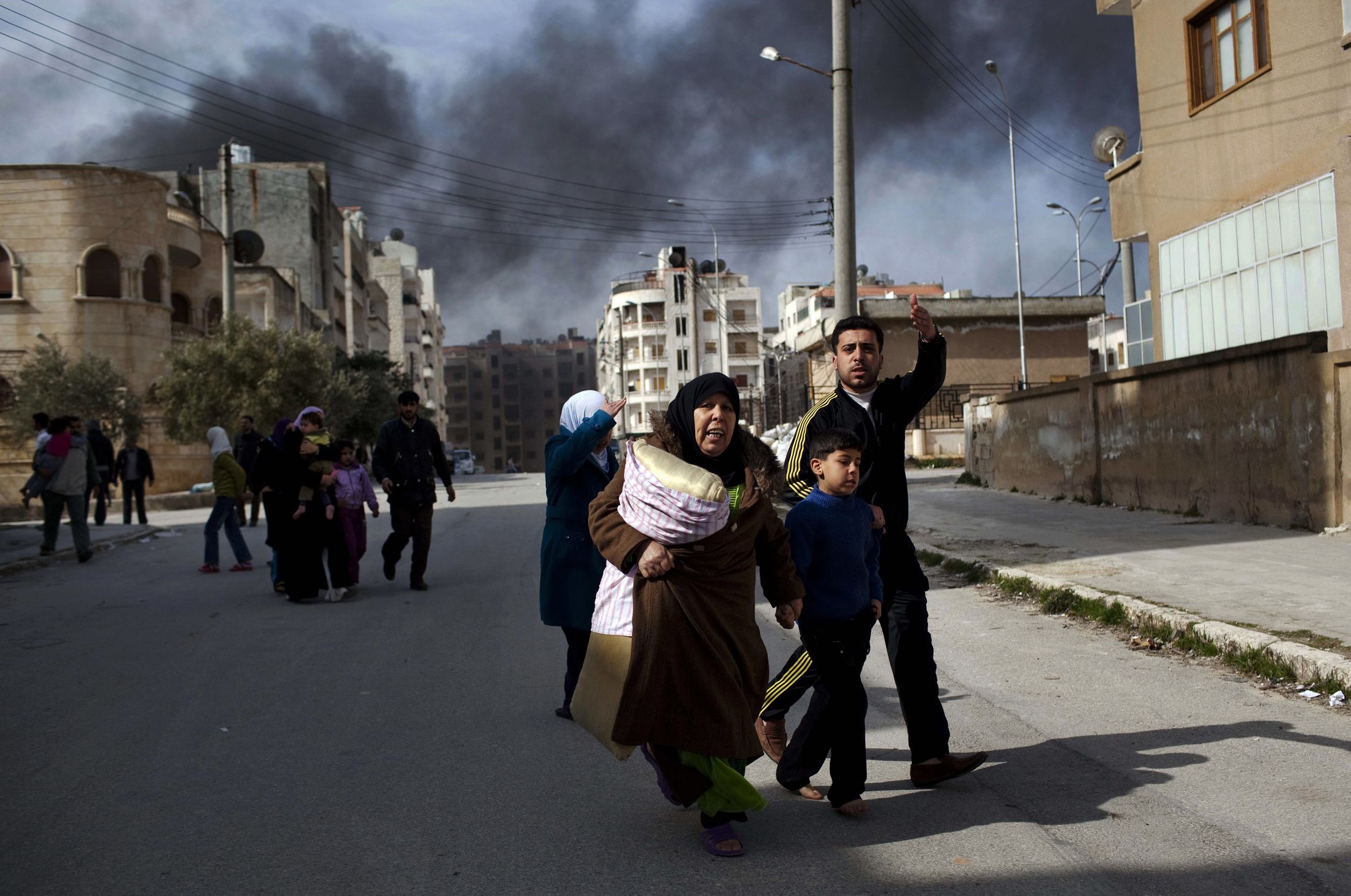 Part of the reason Syria’s war has been so devastating is the intense fighting inside densely populated cities. The above photo, part of a Pulitzer Prize–winning collection from 2012, shows what that looks like in practice — a family in the city of Idlib fleeing from the violence overtaking their city. (AP Photo/Rodrigo Abd) 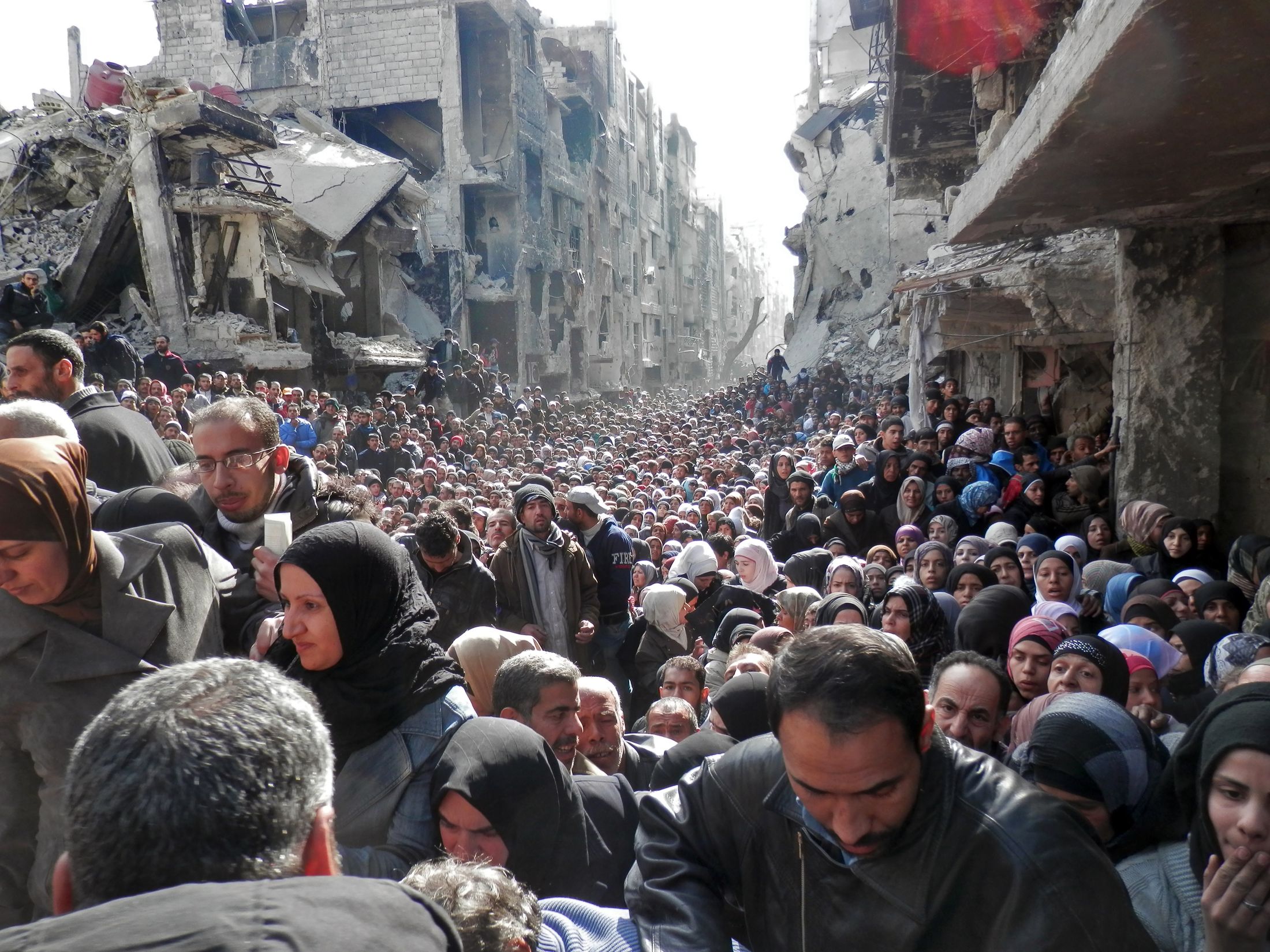 This is the Yarmouk refugee camp, which houses Palestinians, in Damascus. It’s been described as a “living hell” and “the worst place on Earth,” as a result of the utterly miserable living conditions. This 2014 photo, which shows masses of people waiting for food and aid amidst bombed-out buildings, is a perfect encapsulation of how bad things have gotten in Syria. (United Nation Relief and Works Agency/Getty Images) 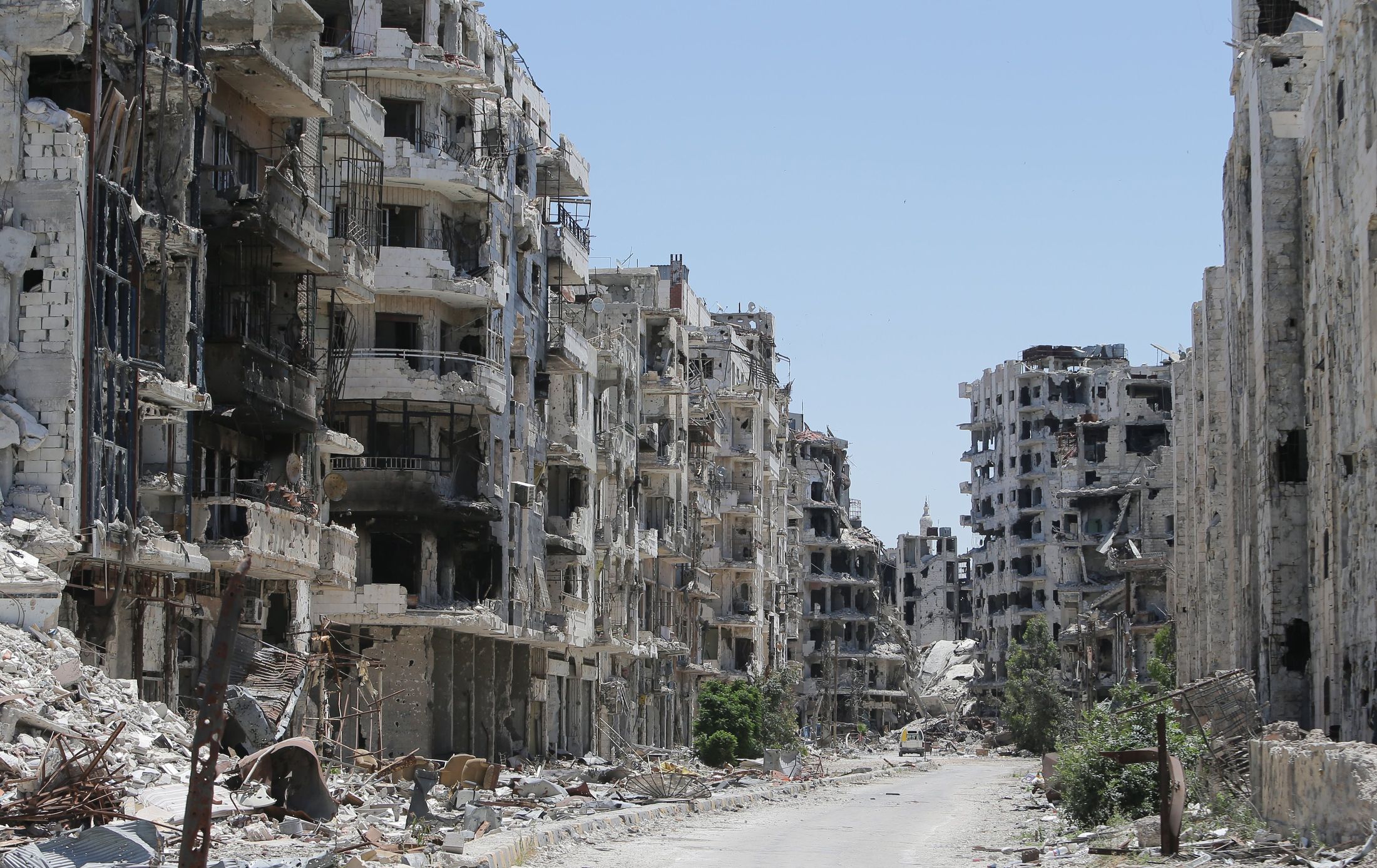 These shattered buildings are in the Khaldiyeh neighborhood in Homs, in 2014. It’s a city that was described as the “capital of the revolution” when anti-government protests began in 2011 for the intensity of the protests there. The complete destruction there is a testament to how thoroughly Bashar al-Assad’s strategy to deal with the protests — attack them mercilessly, and turn the peaceful revolution into a civil war — has succeeded. (Joseph Eid/AFP/Getty Images) 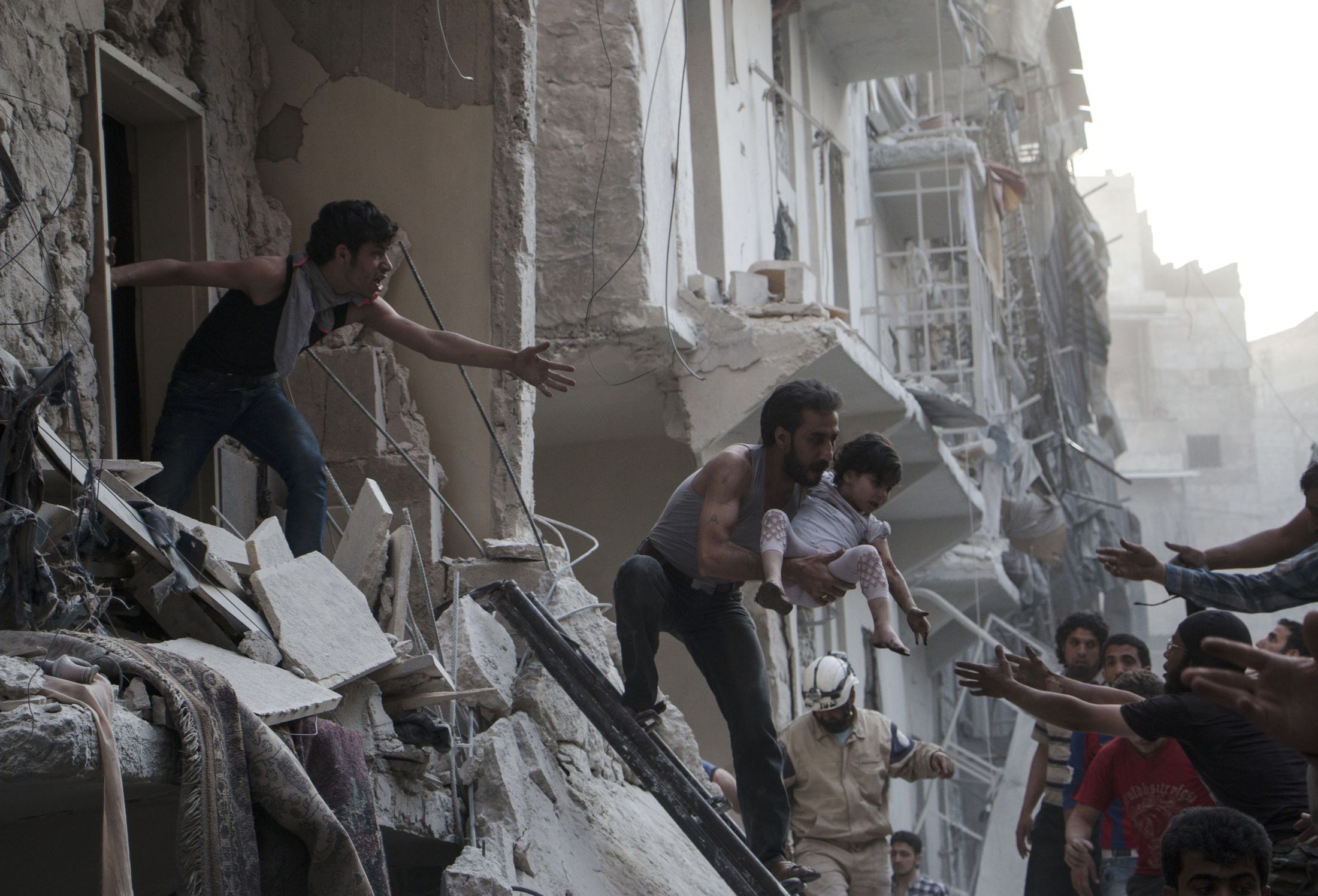 The Assad regime has deliberately and extensively targeted Syrian civilians during the war. What you see above is the aftermath of a “barrel bomb” attack in Aleppo, in May 2015. Barrel bombs are containers filled with explosives and sometimes metal, indiscriminately dropped from helicopters. “Assad’s indiscriminate use of barrel bombs deep in opposition-held territory means that for many there is no safe place to hide,” Kenneth Roth, the executive director of Human Rights Watch, writes in the New York Times. (Karam al-Masri/AFP/Getty Images) 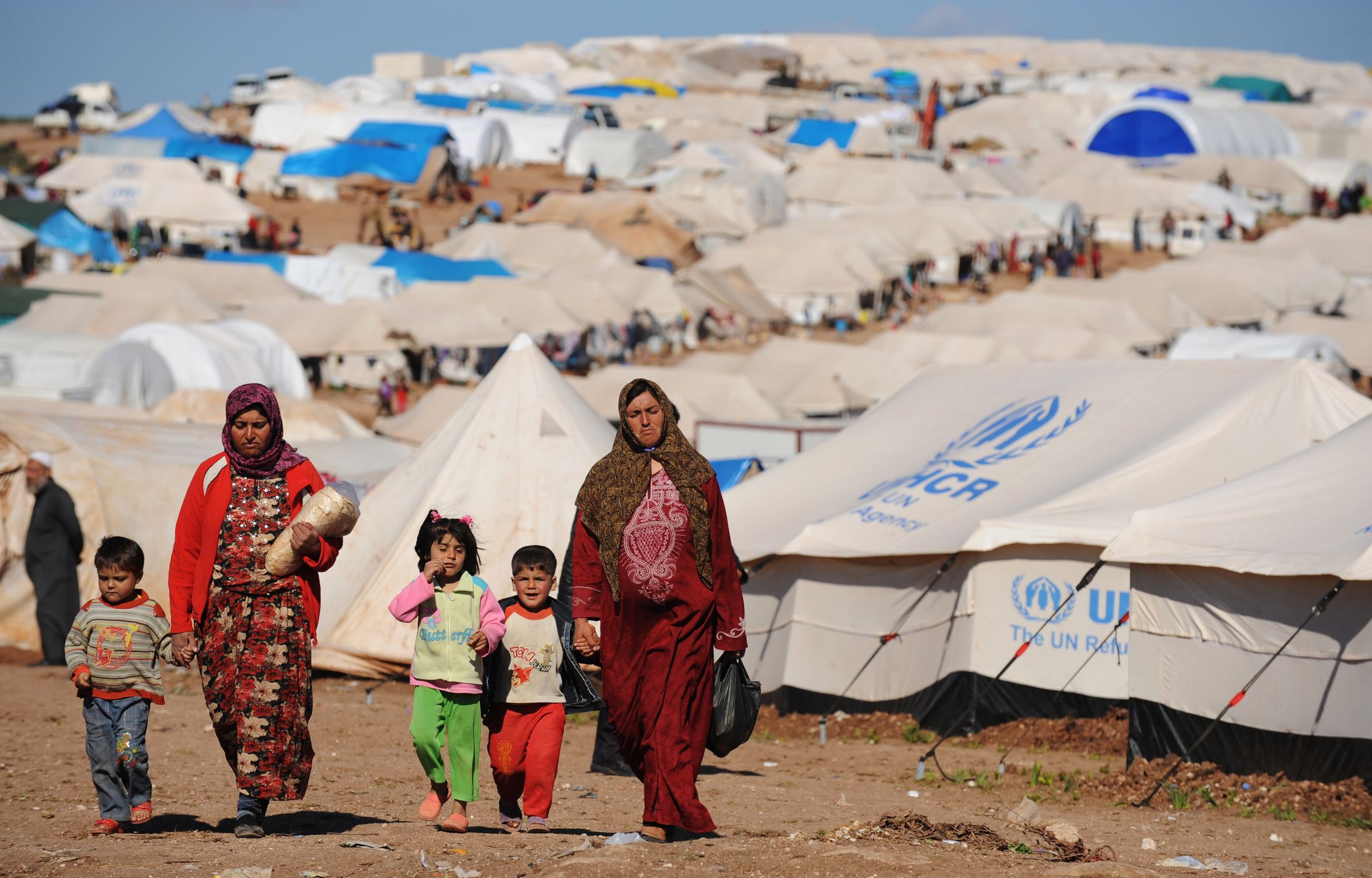 As a result of this horrific violence, about 7.6 million Syrians have been internally displaced — stuck in Syria, but forced out of their homes. These people often live in crowded and underfunded camps, like the Atme camp on the Turkish border, pictured above in 2013. (Bulent Kilic/AFP/Getty Images)

Displaced Syrians wait for food from an NGO near Azaz, Syria, in 2012. (AP Photo/Manu Brabo) 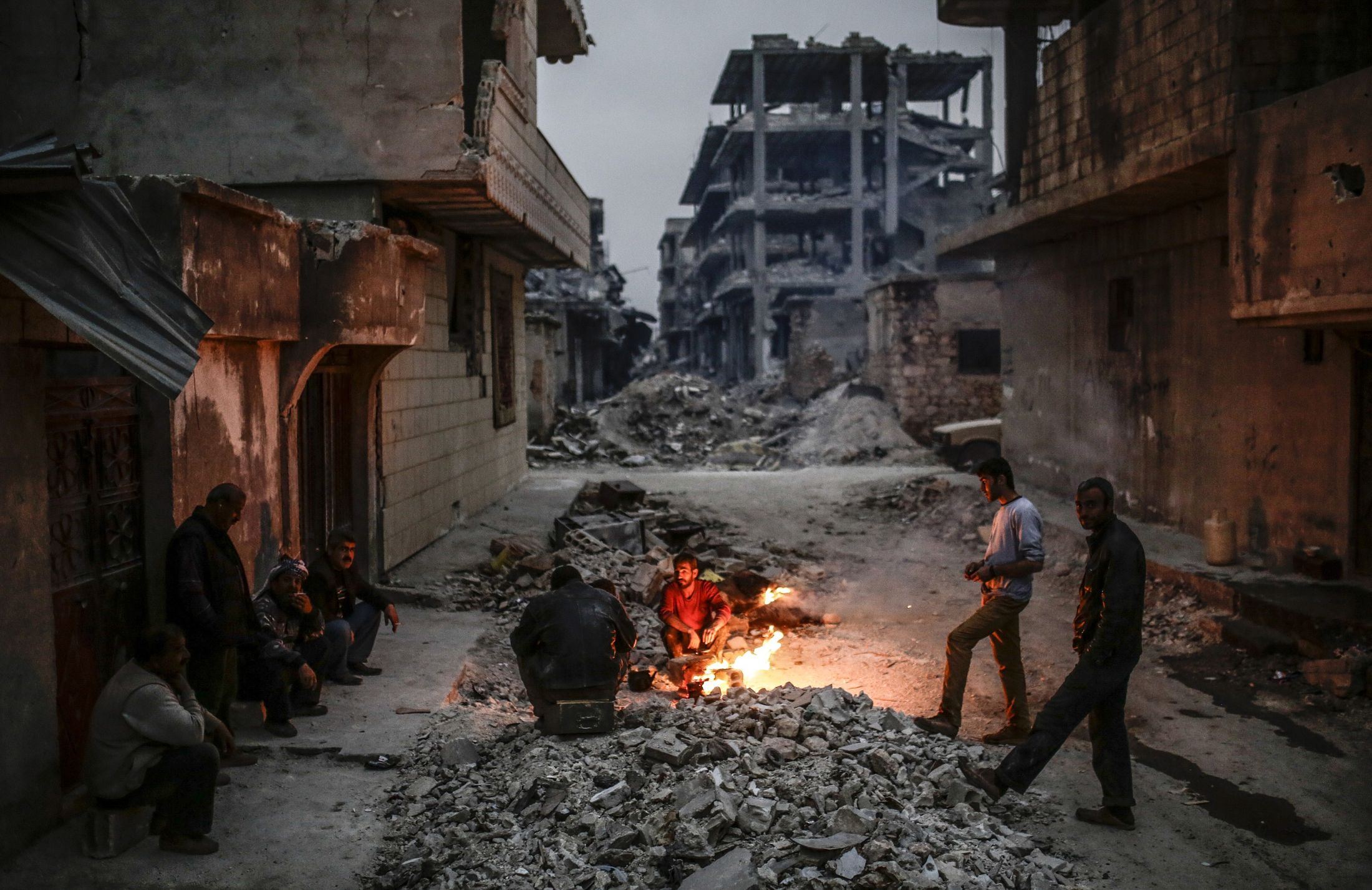 Since ISIS entered the war in force in 2013, the group has targeted civilians and destroyed whole neighborhoods as well. The above scene shows Kurdish Syrians in Kobane, Syria — a place besieged by ISIS for months. While ISIS was driven out of Kobane earlier this year, the cost to the city and its residents was absolutely devastating. (Yasin Akgul/AFP/Getty Images) 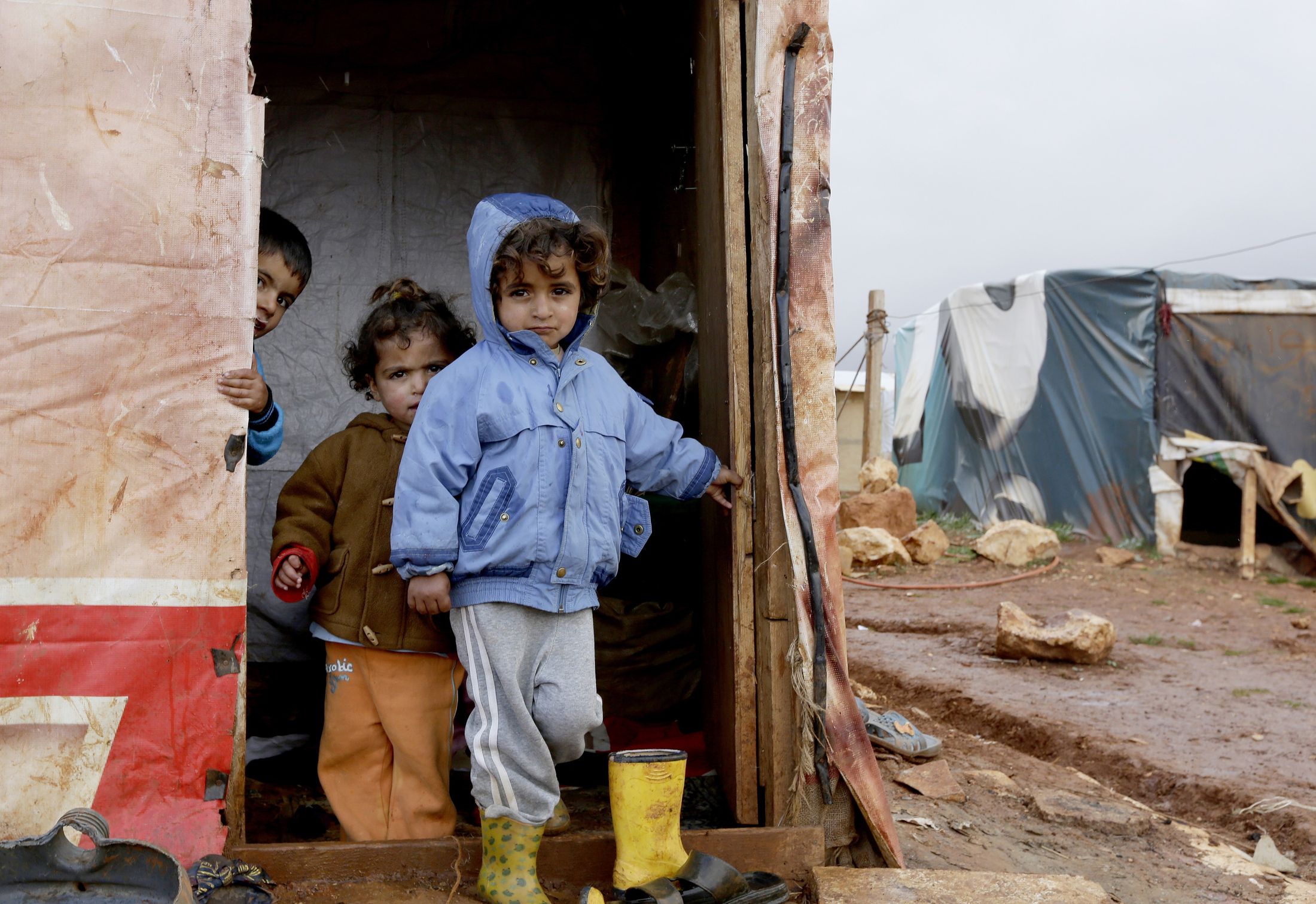 Of the roughly 4 million Syrians made international refugees by the conflict, the overwhelming bulk are living in neighboring countries, particularly Lebanon and Turkey. They’re often stuck in hastily constructed and poorly funded refugee camps — like these children in an unofficial refugee camp in Jbaa, Lebanon, in late 2014. (Anwar Amro/AFP/Getty Images)