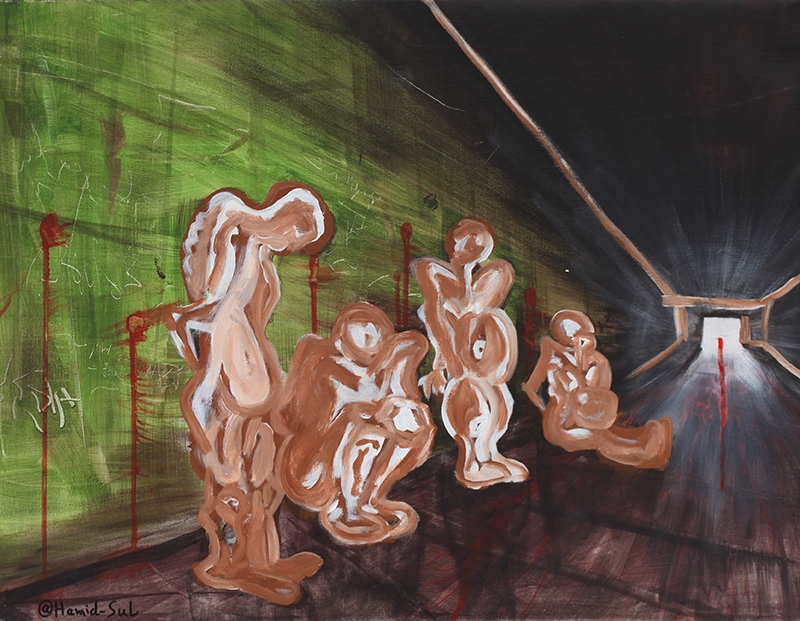 Hamid Suleiman’s brash pop-art symbolism and vivid colours express his intensely personal experiences of the uprising. Sulaiman is from the Damascus suburb of Zabadani – an area known for its nonviolent, civil participation in the uprising. In early 2011, he took part in the organisation of peaceful protests against the Al-Assad regime, and was imprisoned several times. He then fled the country first to Cairo and then Paris, where he now lives. His work has been exhibited in Rome, Vienna, Paris and most recently in London.

“One cold night in April I was driving back home with my friends. We were returning from a meeting with activists in Damascus. The night was so cold and it was raining. In the car we were listening to the Pink Floyd album, The Dark Side of the Moon. The song “Us and Them” was playing when I stopped at a red light, at a spot where we used to demonstrate. Then I saw on the sidewalk a group that the regime calls Popular Committees, which are actually not soldiers or security employees. They are poor technicians who have unfixed jobs with the government or they are unemployed people, most of them married with kids, who live on less than $100 (£64) a month. They were standing on the sidewalk feeling cold. Their job was to wait for any demonstration. They carried thick sticks and had arms ready to attack any Syrian who asks for their rights. I was looking them in the eye and listening to the words of the song. I hoped that someday I could translate the lyrics to them, but they had orders to arrest anyone who tried to talk to them. Even when they beat me up and arrested me I could not speak their language because violence is the only language they know. That being the case, I wanted to tell them, “Us and them are just ordinary men.” – Hamid Sulaiman