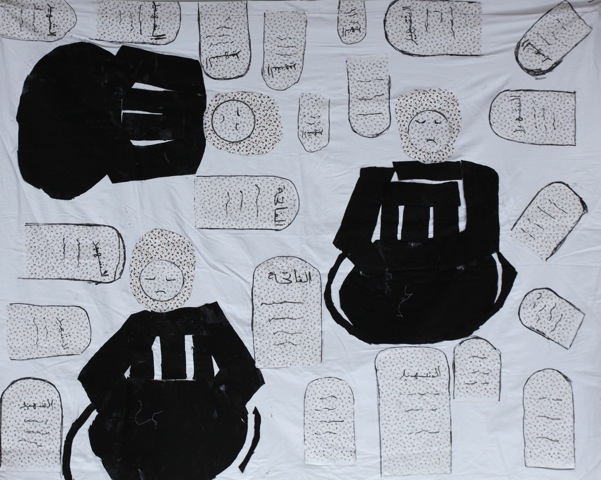 Hazar Bakbachi-Henriot graduated from the Ecole des Beaux-Arts in Damascus, Syria, and the University of Paris. Her unique work, which incorporates collage and painting, has been exhibited in France and in Europe.

Originally from Aleppo, a city known for its textile manufacturing, Hazar is now based in France. Her work, however, remains influenced by her roots and the desperate humanitarian situation in her native country. Last year Hazar organised two-week art workshops with women in refugee camps in Antakya, near the Turkish-Syrian border, in conjunction the organisation Emergency Solidarity Syria. Her aim was to get the women to tell their stories by making collective art that uses embroidery and tapestry as its medium.

“The first few days were difficult. It was silent … like a pebble. But as soon as we started cutting the fabric and glue, the words came back. [It was an] exchange of sharing and expression for seventeen women, aged from fifteen to fifty years old. It was a way for them to participate in the revolution and for the world to know that they exist and they are not to be seen as helpless victims.”
– Hazar Bakbachi-Henriot speaking to the French newspaper, La Nouvelle Republique