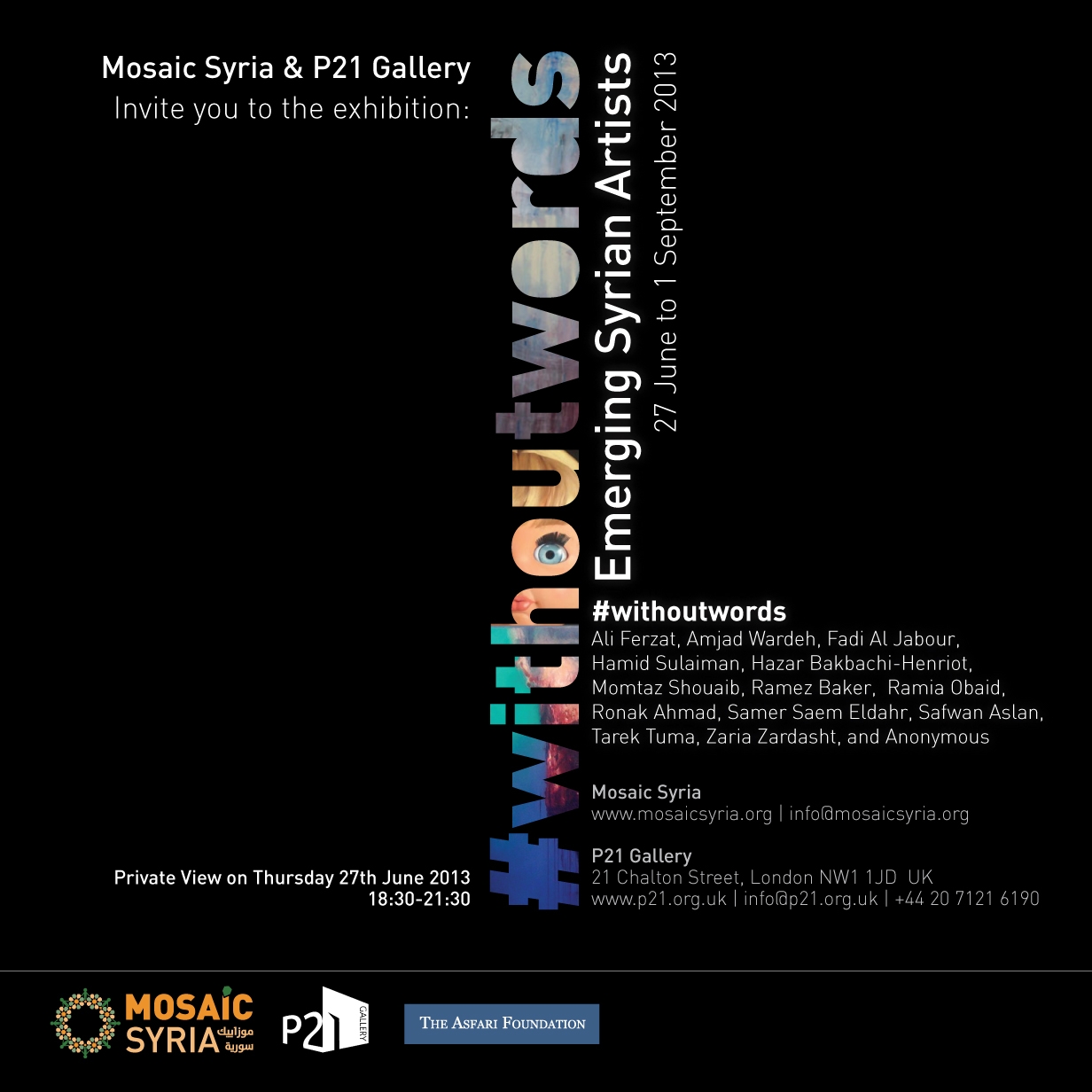 Mosaic Syria & P21 Gallery present #withoutwords, an exhibition showcasing fine art and visual installations from emerging Syrian artists influenced by the desperate humanitarian situation in Syria and the struggle of their people for freedom. Taking place at London’s P21 Gallery and and open to the public from June 27 running until September 01, the exhibition features a mix of paintings, photography, metalwork, installations, political cartoons and sculptures.

Some of the exhibited work has been smuggled out of Syria and will be exhibited abroad for the first time. Other pieces have been collected from Lebanon or Jordan or made in the refugee camps of Turkey. Political cartoonist Ali Ferzat, Syria’s ‘artist of the people’ and Time Magazine’s ‘100 most influential people of 2012’, will be visiting the exhibition in August to discuss the impact of his work in Syria and within the wider context of the Arab uprising.

Over 40 of Ali Ferzat’s cartoons will be on display including some of his early drawings originally published in state run Syrian newspapers. In early 2011, pre-dating the initial uprising in Syria, Ferzat received international media attention after being viciously attacked by pro-regime thugs and forced into exile, forbidden to continue his craft having begun depicting Assad and his regime in his satirical illustrations.

Ali Ferzat’s humorous and tongue-in-cheek illustrations gave the world a glimpse into the creative side of the Syrian uprising offering an alternative Syrian expression, away from the relentless and bloody images of a civil war. Mosaic Syria aims to challenge mass media’s reductive narrative and bring to the fore a group of Syrian artists whose aesthetic expression has been shaped by their recent experience of the revolution.

#withoutwords features, in the main, a younger generation of artists stationed across the Arab world and Europe, many of whom studied in Syria and have since departed. Illustrator and painter Hamid Suleiman has a painting displayed entitled ‘Us and Them’ in reference to the Popular Committees of the Assad regime who would beat and imprison him for participating in demonstrations. Beirut based painter Samer Saem Eldahr has produced a series of abstract expressionist paintings his ambition being to ‘explore the depth of the inner human condition’. Fadi Al Jabour, a Syrian painter and sculptor now residing in Berlin exhibits with his ‘Near Death’ series of paintings in which he aims to ‘depict the daily life that everyone in Syria is living – the coexistence with death.’

Culture has long been a major preoccupation of the Syrian state, which encouraged writing, painting, sculpture, filmmaking, and other art forms. In spite of, or perhaps because of, this official emphasis on culture, under Hafez Al-Assad (father of Bashar Al Assad) Syrian artists and writers complained that they could scarcely breath, so unsure where they of when they were breaking the rules and of the consequences of what they did.

In 2011, school children from Deraa did something unheard of: they spray-painted a wall with the words ‘THE PEOPLE WANT TO TOPPLE THE REGIME’, an act for which they were arrested and tortured. Widely disseminated through online media and social networks and kick-started by Twitter, the impact of this defiant piece of graffiti marked the beginning of popular and peaceful protests across the country. In the early months of the 2011, during these demonstrations, new art and cartoons, absurdist political happenings, songs and mobile-phone cinema popped up and became commonplace acts of defiance across the country.

#withoutwords explores the function of art, as a force for change and a way of galvanising wider public opinion. Mosaic Syria’s aims are to consolidate the work of Syrian artists both in Syria and outside; and help develop an understanding of the significance of art in the promotion of peace and stability in a conflict and post-conflict Syria.

In August, Mosaic Syria will host a public auction of the works on display with funds raised shared between Mosaic Syria’s aid relief relief work and the artist.