Awareness is only half the battle for Syrian women in Jordan 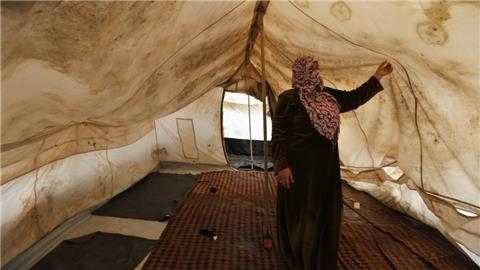 As a documentary film-maker who has covered human interest stories across the Arab world for over a decade, I have noticed that the most moving and profound stories are told only after the camera stops rolling. I found Salma’s story while filming the plight of Syrian refugees in camps in Jordan recently. At 15, Salma was married off to an older man, who was not Syrian, by her father. Without the proper documents to make the union official, she endured abuse at the hands of her husband and in-laws for nearly three months before she was sent back to her family in the refugee camp, even though it was known that she was pregnant at the time. There are 1.3 million refugees under shelter in Jordan, with 747,360 Syrian refugees registered with UNHCR (the UN’s refugee agency). The majority are young girls, some as young as 12, who are pushed into marriage in order to escape the squalor and uncertainty of refugee life. While the practise of early marriage is prevalent in small Syrian towns, they are usually married to cousins, close relatives or neighbours. Dubious marriages These girls, however, are married to strangers from neighbouring Arab countries, which is where the problem usually begins. Fathers are willing to give consent to a dubious marriage in an attempt to evade responsibility for their daughters. They also fail to officially register the union as official documents are often absent among refugees – a problem the government has been struggling to handle. What aggravates the problem is that these women choose to remain silent about their experiences of shame. Girls like Salma are taught to feel guilty rather than victimised – a reflection of a deeply ingrained problem of how a woman is perceived. A girl may be beaten, abused, sold and returned to her family like a piece of furniture, in some traditional segments of Arab society. Treated as an object or commodity even, Salma only changed from being her father’s property to her husband’s. She never told a soul about what she suffered. Ashamed about her experience, Salma believed she was being punished for something she had done – even if she couldn’t understand what wrong she had committed. “He was my husband, and it was alright for him to do as he pleased,” Salma told me. When her family finally noticed she was pregnant, she told them everything. Her father immediately went looking for her ex-husband, but the man had already left the country. A fatherless child is stigmatised for life in Arab societies, so when the baby was born, Salma had to register the child under her own father’s name. The fate of the women outside the camp is not very different. With complaints of sexual harassment and abuse on the streets, at work, and even in their own homes, the International Rescue Committee’s September 2014 report “Are We Listening” sheds some light on the struggles faced by these women.The report claims that “one in three women stated that they felt too scared or overwhelmed to leave their homes at all”. Scale of the problem In crimes committed against women like Salma, there are multiple perpetrators. In her case, one of those perpetrators was her father and mother who bear the same amount of responsibility for her abuse as her ex-husband. They raised their daughter to accept abuse from a man in the belief that she is nothing more than property to be bought and sold. Therefore, assessing the scale of this problem is hard as most victims do not fully understand what domestic violence is and they are unwilling to talk about it. A recent UN report on gender-based violence among Syrian refugees in Jordan states that “specialised, confidential, and supportive services currently available to Syrian women and children survivors of gender-based violence are not sufficient and when such resources are available, Syrian refugees are very often unaware of them”. In addition to the lack of awareness, these women are unwilling to vocalise their struggles. The same report claims that the refugees were more likely to confide in family members than service providers or the police, but often the matriarchs of the family of tribe will try to keep a lid on the story, saying that a woman’s duty is to keep her house together. Sadly, this mentality does not exclusively afflict refugees. In the conservative rural areas of Jordan, many women are stuck in abusive marriages.The problem is not unique to Jordan, or the Arab world for that matter. The abuse of women is a worldwide pandemic, and not specific to a certain culture, but we can only begin fighting it at home and in schools, one step at a time.