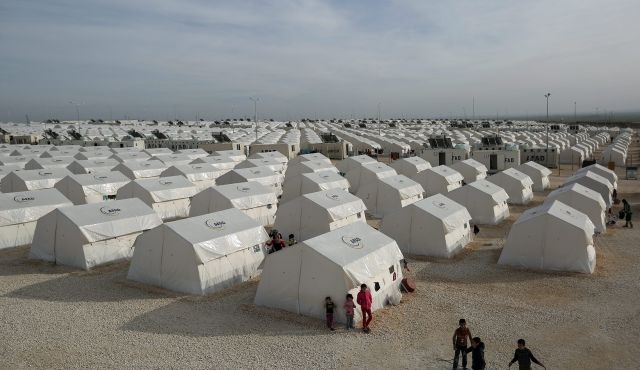 he World Food Program is confronting its worst challenge since World War II in trying to tackle five top-level humanitarian crises at the same time, the head of the UN agency said Friday. Ertharin Cousin said in an interview with The Associated Press that the five crises — in Syria, Iraq, Central African Republic, South Sudan, and the Ebola epidemic in West Africa — currently require large-scale operations by WFP and other humanitarian agencies. In addition, she said, WFP is doing preparatory work for a potential scale-up in food assistance to four other countries where there is growing political instability — Yemen, Nigeria, Ukraine and Libya. Cousin said the demands are overwhelming the donor community and as a result WFP had to cut food assistance to six million Syrians inside and outside the country by 30 percent in January. “We have more crises that require surge operations of the humanitarian community, and WFP specifically, since World War II,” she said. Cousin said WFP immediately requires $113 million for Syria and $102 million in the region to continue to provide food assistance during the upcoming months. The agency stopped giving food vouchers to two million Syrian refugees for several weeks in December because it had no money, and was only able to restart aid after a social media appeal that generated funding into January. Syrian refugees who fled to Iraq to escape last summer’s advance by fighters from the Islamic State terrorist group are faring better because of a $148 million donation to WFP from Saudi Arabia which has helped some 1.1 million people since June, Cousin said. But she said that money will run out by May 1 — around the time a military operation to retake Iraq’s second-largest city Mosul is likely to begin. WFP is appealing to donors for funds to meet the escalation in humanitarian needs for people displaced by the expected military action, she said. Cousin lamented that despite increasing violence “the world is not paying attention” to South Sudan, where WFP aims to assist three million people this year, and Central African Republic, where it is helping 1.5 million people inside the country and in neighboring nations. WFP has deployed a thousand people to the three hardest-hit Ebola nations — Liberia, Sierra Leone and Guinea — and is providing food assistance to 3.3 million people as well as logistical support to World Health Organization staff, she said. Cousin said the UN is currently feeding five million people in Yemen “and it could get worse.” In Nigeria, she said, WFP is watching increasing malnutrition cases in the north and studying opportunities to provide assistance. In Ukraine, the agency has reached 50,000 people and is working to increase food assistance to 190,000 people on both sides in the conflict-torn east over the next few weeks, she said. Cousin said WFP is helping 58,000 people in Libya through local non-governmental organizations and is watching the evolving political situation and assessing a “scale-up” in operations.